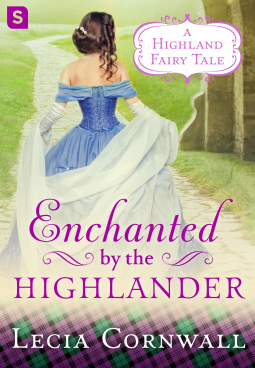 Book Review: Enchanted by the Highlander (A Highland Fairy Tale #4) by Lecia Cornwall

Expected publication: November 14th 2017 by Swerve
Summary: Gillian MacLeod is shy and quiet, the least likely of all her sisters to seek out excitement and adventure. But on a moonlit night at a masquerade ball, Gillian steals a kiss from a mysterious stranger, knowing she’ll never see him again.

John Erly, disowned by his noble English father, started a new life in Scotland. Most people are suspicious of the foreign mercenary and he does everything is his power to avoid romantic entanglements. But he can’t forget the bewitching beauty who kissed him in the dark, and stole his heart, even though he has no idea who she might be.

A year later, John is given the duty of escorting Gillian to her wedding and immediately recognizes her as the temptress he’s dreamed of for months. There’s not much he can do when she’s promised to another man, but fate intervenes and this time, passion—and adventure—can’t be denied. Honor demands he stay away from the MacLeod’s enchanting daughter, but love has a very different ending in mind…
(from Goodreads)

Review: I don’t normally read Scottish/Highlander historical romances (I’m more of a Regency England kinda gal) but DANG, am I glad I made an exception! This book is AMAZING. I still don’t think I’m much of a fan of clans and plaids and claymores and what-all, but the writing is spectacular and the characters are just… JUST. Words can’t even. I know it’s cliché, but I really DID stay up way past my bedtime because I just could not put this book down. I’d tell myself “one more chapter… ok, one MORE chapter… just ONE more, for real this time…”

I love Gillian’s character. She’s quiet and everyone says she’s so shy, and maybe she is a bit but it seems she’s more soft-spoken in a crowd of eleven sisters (eleven!!), all who seem to have no trouble ploughing right over them. When she’s apart from her father and sisters (who speak for her in a well-intentioned way that Gilly tolerates but I would end up snapping eventually) she is pretty much the embodiment of Shakespeare’s line “Though she be but little, she is fierce.”

John is also great, a little bit broken, a whole lot of misunderstood, and thoroughly a good man.

It wasn’t until about 75% of the way through the novel that the “fairy tale” part of the series name (“A Highland Fairy Tale”) came to light, but when it did I was so delighted. It’s a tale I don’t see much of in romantic retellings, and it’s worked into the story in a way that’s totally believable. I won’t say more than that so you can be pleasantly surprised.

This book is the fourth in Lecia Cornwall’s A Highland Fairy Tale series. I felt like I wasn’t missing too much by not reading the other books in the series first, though there are definitely spoilers for the earlier books just judging by some of the backstory of Gillian’s sister Fia and her husband. If that kind of thing bothers you, definitely read the series in order. I’m going to go back and start with the first book now, and I’ve added all of Lecia Cornwall’s books to my To Read list.

*I received a free copy of this book from NetGalley and the publisher in exchange for my honest review.