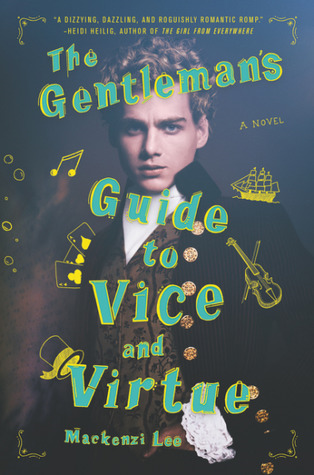 Book Review: The Gentleman’s Guide to Vice and Virtue (Guide #1) by Mackenzi Lee 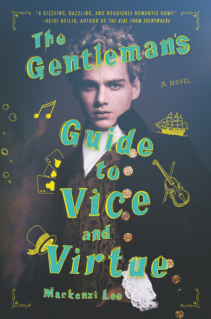 Published June 27th 2017 by Katherine Tegen Books
Summary: Henry “Monty” Montague was born and bred to be a gentleman, but he was never one to be tamed. The finest boarding schools in England and the constant disapproval of his father haven’t been able to curb any of his roguish passions—not for gambling halls, late nights spent with a bottle of spirits, or waking up in the arms of women or men.

But as Monty embarks on his Grand Tour of Europe, his quest for a life filled with pleasure and vice is in danger of coming to an end. Not only does his father expect him to take over the family’s estate upon his return, but Monty is also nursing an impossible crush on his best friend and traveling companion, Percy.

Still it isn’t in Monty’s nature to give up. Even with his younger sister, Felicity, in tow, he vows to make this yearlong escapade one last hedonistic hurrah and flirt with Percy from Paris to Rome. But when one of Monty’s reckless decisions turns their trip abroad into a harrowing manhunt that spans across Europe, it calls into question everything he knows, including his relationship with the boy he adores

Review: Let me first lead by saying I read a LOT of historical romance set in the Georgian/Regency era. Let me then follow that with – holy anachronisms, Batman!! (The most painful: “Hey there, my foxy lady.”)

This is definitely YA/NA by the tone. unread plenty of adult Regency romance featuring 18 year old leads and the immaturity of Henry “Monty” Montague is much more like an 18 year old in this day and age than one in the 1700s.

I wanted to slap Monty several times, and he’s very much one of those people who manage to take two steps forward then one step back. He’s got a major case of the poor-pitiful-me’s as a titled, white non-cis man in the 1700s. Meanwhile his best friend is half-black and an orphan being raised by his English aunt and uncle in a society that is very unwelcoming to people of color, and his sister is a scientifically minded woman interested in medicine in an age when women aren’t allowed an education and are technically owned by their fathers and then their husbands. So yeah, Monty, things are tough all over. But then I also hurt for him and wanted to see him have a happy ending.

Though I had to throw this book to the side several times and read something ELSE for a while, it did grow on me (rather like a fungus). And darling Monty did manage to have some personal growth so I suppose I felt slightly less like slapping him by the end of the book. I look forward to learning more about Felicity and her adventures in the next book – now there is a strong woman!!

One thought on “Book Review: The Gentleman’s Guide to Vice and Virtue by Mackenzi Lee”