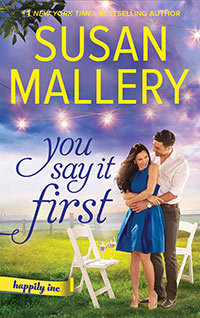 Summary: The #1 New York Times bestselling author of the Fool’s Gold romances invites you to visit Happily Inc., a wedding destination founded on a fairy tale

Sculptor Nick Mitchell grew up in a family of artists and learned from his volatile father that passion only leads to pain. As he waits on a new commission, he takes a day job as a humble carpenter at a theme wedding venue. The job has its perks—mainly the venue’s captivating owner, Pallas Saunders. Although he won’t let love consume him, for ecstasy with an expiration date, he’s all in.

Pallas adores Weddings in a Box. But if she can’t turn the floundering business around, she’ll have no choice but cave to her domineering mother and trade taffeta for trust funds working at the family’s bank. Then when a desperate bride begs Pallas for something completely out of the box, her irresistible new hire inspires her. Nick knows she doesn’t belong behind a desk, and she knows in her heart that he’s right—where she really belongs is in his arms.
(from Goodreads)

Review:
OK first and foremost – what the heck kind of name is Pallas? There’s a little blurb in there explaining it, but I don’t buy it. Her name was distracting for me through the entire book. Also, I think the town name is stupid and don’t understand the relevance of the title. There, that’s most of the bad stuff I have to say done with, now let’s get to the good stuff!

This is the first in a series about the people in a small town called Happily Inc, which caters to weddings. What I don’t get is, if the town is entirely about weddings, are there other wedding venues and wedding planners in the town? If not, then if Weddings in a Box shut down, would the entire town fold? Or if there are, why don’t we hear about any of them at all?

Anyway, if you’ve read any of Susan Mallery’s Fool’s Gold novels, you have an idea what you’re in for. There are a lot of side characters and I had a hard time keeping them all straight. Our leading lady, Pallas, is one of a group of six gal-pals who are all creative women than own their own businesses (for the most part). Then our main man Nick is one of five brothers (though only two of his brothers are in town, though his oldest brother is also mentioned a number of times as being engaged and I assume is the star of his own show in another series). We also have Pallas’s twin brother Cade, her cousin Drew, and the mysterious and semi-reclusive bad boy famous mystery author (whose name I can’t remember) to round out the number of eligible lads and ladies in town. And of course each one is super quirky in their own very special way. Which is, actually, your basic set-up for the first book in a series about a small town. There are some little hints about potential future pairings, as well as a fair amount of info dump on the pasts of several of the side characters. Again, pretty typical for your small town romance series.

I liked Pallas and Nick as characters, and they both felt fairly real and rounded out to me. Pallas has a rough relationship with her mother, and Nick has a different but also rough relationship with his father. Both characters are able to give some insight to the other, and in doing so also gain some insight into their own situations, which I liked. There is a symmetry there that really works, and is even highlighted in some witty banter between Pallas and Nick!

“I like that you’re emotionally broken,” she said cheerfully. “It keeps the playing field level.”
“I’m not broken. I’m quirky.”
“Is that what we’re calling it?”

This was a fun read, with a few emotionally-charged wrenches thrown in the works to keep things interesting. I didn’t laugh out loud and I didn’t cry, but I did smile a lot and almost tear up a time or two, so that’s a solid 4 star rating for me.

This is the first in a series, but can for sure be read as a standalone.

2 thoughts on “Book Review: You Say It First (Happily Inc #1) by Susan Mallery”

Did a couple of tests strands because I'm thinking of doing a BIG CHOP and then putting orange and green streaks in my hair. I wanted to see if the colors would show without needing to bleach, and I think I love it. 💕 Now to just wait for my awesome sister in law to have some free time to come do me a good hair chop! #happyfallyall
I'm back in the office one day a week, and I decided to explore my lunch break walking path options today.
Not too shabby for my first foray into jewelry making!! Bumblebee jasper pendant with labradorite, tiger eye, and gray onyx beads. 💕
Started a new craft project and immediately launched a shard of metal wire shrapnel directly at my eye. Good thing I'm an excellent flincher, lol.
Since August is Romance Awareness month, @readforeverpub changed things up for their influences and did special curated romance boxes! I picked the Jodi box, and am so pleased with the selections! I can't recommend West End Earl by @bethanywriteskissingbooks enough, and I'm excited to read these other new to me titles!
Started over - whomp whomp! At least it's looking much more triangular now. 🤣