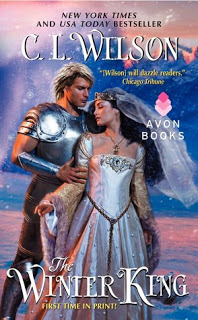 Published July 29th 2014 by Avon
Summary: After three long years of war, starkly handsome Wynter Atrialan will have his vengeance on Summerlea’s king by taking one of the man’s beautiful, beloved daughters as his bride. But though peace is finally at hand, Wynter’s battle with the Ice Heart, the dread power he embraced to avenge his brother’s death, rages on.

Khamsin Coruscate, Princess of Summerlea and summoner of Storms, has spent her life exiled to the shadows of her father’s palace. Reviled by her father, marriage to Wintercraig’s icy king was supposed to be a terrible punishment, but instead offers Kham her first taste of freedom—and her first taste of overwhelming passion.

As fierce, indomitable Wynter weathers even Khamsin’s wildest storms, surprising her with a tenderness she never expected, Kham wants more than Wynter’s passion—she yearns for his love. But the power of the Ice Heart is growing, dangerous forces are gathering, and a devastating betrayal puts Khamsin and Wynter to the ultimate test.
(from Goodreads)

Review: C.L. Wilson is a new author to me and OH MY GOSH, am I so glad I read this book! This took me 6 days to read, but it only took that long because I came down with pneumonia shortly after starting and was, as my husband so eloquently put it, basically dead for a week. It’s epic Fantasy meets Romance and the best possible bits of both. About halfway through I noticed this is tagged as “paranormal romance” which I don’t think really fits. Paranormal romance makes me think of vampires and shamans and a typically urban fantasy setting, but maybe that’s just me. This is set in a medieval fantasy setting where the ruling class has weathergifts (magic), and Wynter gets his magic from having basically drunk from the essence of a dead god. The world building was amazing, and I liked how the royal family of Summerlea all have different aspects of weather magic they’re gifted with. The run around calling each other names based on their gifts, so the three princesses (who are out leading lady Khamsin’s sisters) are Spring, Summer, and Autumn (no real mention on what their particular gifts are, though), her brother is Falcon (because he can communicate with birds, though I’m not quite sure how that’s weather related?), and Khamsin is known as Storm (though absolutely no one calls her that until pretty far into the book, and then it’s like it’s inserted as an afterthought). Betcha can’t guess what Kham’s power is…

Actually, my biggest issue with this book was probably the author’s choice of names. The hero’s name is Wynter of Wintercraig, the Winter King. OK, you probably could have named him just about anything but Wynter. There’s also a side character named Reika Villani – with a last name like “Villani” you just know she’s going to be bosom friends with our heroine, right? Riiiight… Another side character’s name is Belladonna (a poisonous plant, also known as deadly nightshade) – bet she won’t end up being a shady character in any way, nope, not her.

Aside from the names, I loved this book. I loved the world building, the history of the countries and their gods and their magics. The overall plot is incredible, and all the little twists and bumps within are great. One of my main issues with romances is that plot devices are thrown in to shake things up when the leads are getting too close to their HEA too soon, but I didn’t feel that happened in this book. It was a bit of a slow burn, with plenty of bumps that were very organic to the overall story.

If you know me, you know I love broken, unwanted, unloved people. Seriously, while other little girls were dreaming about Prince Charming from Cinderella or Eric from The Little Mermaid, I was all about Quasimodo from The Hunchback of Notre Dame. So it’s no surprise that I immediately fell in love with Khamsin, the unwanted princess who never should have been born. Her father blames her for her mother’s death when she was three years old, and she’s basically shut away in a little used part of the castle and the people basically don’t even know they have a fourth princess. No one loves her but her nurse and her siblings, and she refuses to let her abusive horrible father break her. She is strong, spirited and proud, while at the same time wanting to be like her hero and ancestor Roland who basically sacrificed his life to win a war for his country.

Then there’s Wynter, who parents were killed when he was only 16 and suddenly he’s a teenage king and also raising his 6 year old little brother basically by himself. He struggles through and manages to be this good and fair king for like 10 years, until Kham’s jerkbutt brother Falcon comes swooping in and steals his intended bride, one of their kingdom’s most prized treasures, and slaughters a bunch of people when he makes his escape – including Wynter’s only family, his little brother who is only 16. Cue Wynter’s rampage and the three year war on Summerlea. Basically, Wynter is this really good guy just trying to do his best that swallows some of the essence of a dead god to give him terrible powers to wreak havoc on his enemies.

Since I immediately loved both Khamsin and Wynter, I was so glad to see their relationship go through several stages of development, including dealing with some very real trust and self-worth issues they both have, on top of the whole being forced into marriage as a contract for peace added layer of confusion. What’s real? Am I the on
ly one feeling this way? Do I really feel this way? What’s true, and what’s a lie? Ooh, it’s all so delicious! And heart breaking!

OK, this review is already longer than I wanted it to be, so I’ll sum up. I cried several times reading this book. It broke my heart, give me glimmers of hope, and then shattered it again like so much ice. I can’t wait to read the second book in the series, which is about the Sea King (whom we meet briefly in The Winter King) and him courting one of “the Seasons” (Kham’s sisters) to be his bride. I can’t wait to see what happens!!