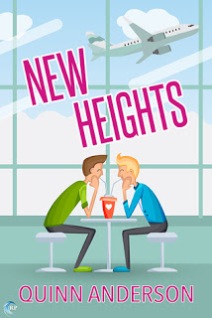 Expected publication: March 12th 2018 by Riptide Publishing
Summary: After attending a friend’s wedding in New York, James Thompson is eager to go home, even though no one will be waiting for him at the gate. He has no expectations for his trip back to Charleston other than long lines, security, and bad airplane food. But when an annoying—albeit hot—stranger cuts him in line, James is determined not to be a pushover for once.

For Mika “It’s Mee-kuh, not Micah” Bailey, today’s just another day of boring work travel. That is, until his flight gets delayed, and some irritating (but handsome) guy keeps hogging all the good power outlets. Which means war. In the middle of an airport. In New York. What could go wrong?

Eventually, they declare a truce, and as they get to know each other, their attraction overwhelms them both. Terrified of what he’s feeling, Mika suggests a no-strings hookup, but serial-monogamist James wants more. If they don’t fight for what’s right in front of them, their romance might be canceled before it ever takes off.
(from Goodreads)

Review: This is a cute romance about two totally opposite (or are they?) guys who are both stuck in an airport in New York City waiting for their delayed flight. Everyone is pretty dang crabby to be stuck there, as you can imagine, and hilarity ensues. I love the opposites attract element to this story (with a dash of enemies to lovers), while at the same time James and Mika aren’t opposites so much as two differently shaped puzzle pieces that fit together. (I definitely think James is an edge piece…) Their bumps and misunderstandings feel authentic, and while this definitely has a big dollop of insta-love to it, having both characters acknowledge how bizarre and crazy their immediate attraction is helps me be a little more ok with that. I love that Mika brings out the sass and strength in James, and in turn James helps ground Mika. They’re just so great together.

This was a really quick read, I’m not sure if that’s because it’s actually short or if it’s just because I refused to put it down until I’d read the whole thing.

*I received a free copy of this book from NetGalley and Riptide Publishing in exchange for my honest review.