She wants to escape her present . . .
When Clara Mayfield helps her sister elope, she’s prepared for the scandal to seal her fate as a spinster. What she doesn’t expect is to find herself engaged to the vile Baron Rutherford as a means of salvaging her family’s reputation. Determined not to be chained to a man she loathes, Clara slips out of Essex and sheds her identity: she becomes Helen, maid at the Earl of Ashworth’s country estate. After all, below stairs is the last place anyone would think to look for an heiress . . .
He wants to forget his past . . .
William, Lord Ashworth, is attempting to rebuild his life after the devastating accident that claimed the lives of his entire family, save his beloved sister and niece. Haunted by memories of what was and determined to live up to the title he never expected to inherit, William doesn’t have time for love. What he needs is a noble and accomplished wife, one who can further the Ashworth line and keep the family name untarnished . . .
Together, can they find the perfect future?
From their first encounter, the attraction between them is undeniable. But Clara knows William is falling for Helen, a woman who doesn’t even exist. The question is, if she reveals the truth about her identity, can she trust the broken William to forgive her lie and stand by her side when scandal—and the baron—inevitably follow her to his door?

There are some really great aspects to this book, but in a way I can tell it’s the author’s debut novel. There are just enough rough spots and abrupt shifts in mood and attitudes that I went and checked her author page to see if it was, and went “Ahh, that makes sense.” It’s not BAD in any sense, there are just some rough gear changes (as I think of it) that all together make this a 4 star read instead of a 5 star one. Things like the chapters that follow the earl switching between referring to him as William and Ashworth, and the viscount as Evanston and (Thomas?), where consistency would have been preferable. We see that with Clara/Helen – she’s referred to by the author as Clara in the sections that follow her, and called Helen in those that follow him. Small inconsistencies like that aren’t huge put-offs in a book, but they do wear away at me and cumulatively added up to make my rating 4 stars instead of 5.
I’ve no doubt that Marie Tremayne will be churning out books I rate 5 stars and rave about in very short order, and I’m very much looking forward to the next book in this series! I think of it kind of like taking a ride with someone learning to drive a stick shift – there are some rough spots while they shift gears, but that doesn’t mean the ride isn’t amazing with a wonderful destination. And this book is definitely an amazing ride.
Through this whole book, I kept picturing Ashworth as Matthew Crawley from Downton Abbey. I don’t normally fancast in my head, or really form a solid picture of the characters too much, but boy, reading Ashworth’s lines I could even hear his voice. I appreciate that he wants to do the right thing by his remaining family. And oh my gosh, Rosa! What a little ball of total cuteness. I also really admire Clara’s strength, both in supporting her sister and then in doing what she needed to in order to survive. I love stories about mistaken identities because of that added layer of intrigue and *drama!* they create, and Lady in Waiting sure delivers on that front.
This is the first book in the series, but like many romance “series” can be read as a stand alone in that Clara and Ashworth’s story has its HEA in this book. There are lots of signs that a future book will be about Ashworth’s sister Eliza and his friend Evanston, and I so look forward to reading that story. (Soon, please, Ms. Tremayne!!) 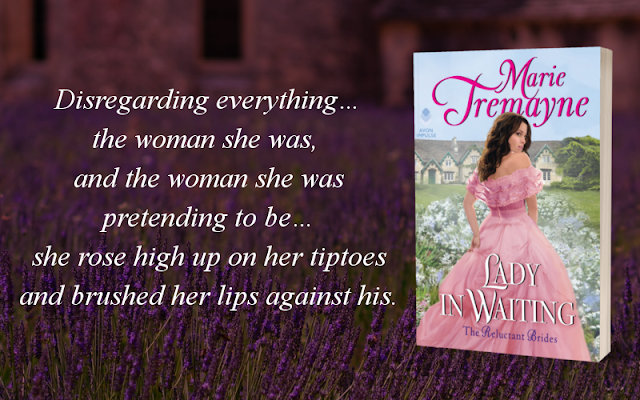 MARIE TREMAYNE graduated from the University of Washington with a B.A. in English Language and Literature. While there, a copy of Pride and Prejudice ended up changing her life. She decided to study the great books of the Regency and Victorian eras, and now enjoys writing her own tales set in the historical period she loves. Marie lives with her family in the beautiful Pacific Northwest.