Thrilling, witty, and oh-so-sexy, Lynsay Sands’ Argeneau novel brings together a beautiful Immortal and the man who is her destiny…
For someone who’s been around for over a hundred and forty years, immortal Elspeth Argeneau hasn’t done a whole lot of living. Now that she’s moved away from her controlling mother, she’s tracking down rogue vampires and enjoying some overdue freedom. A fling would be fun. A life mate can wait. Yet to Elspeth’s surprise, her landlady’s hot grandson checks both boxes.
Wyatt fell instantly in love with Elspeth four years ago. He’s stunned to run into her again, especially as she has no memory of him. Then again, there are a lot of things about Elspeth that don’t make sense, like the miraculous speed with which her wounds heal. And the chemistry that transforms every touch into an explosion of desire. But with mysterious “accidents” besieging Elspeth, the ex-Special Forces soldier appoints himself her bodyguard. But time is running out to uncover the truth about her enemies—and rediscover the man determined to love her for eternity.
Each book in this series can be read as a standalone story. 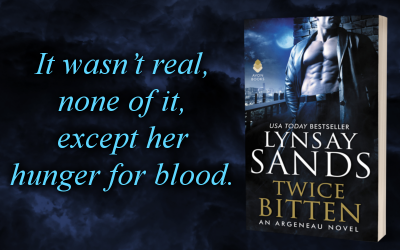 I’m not usually into vampire romance, though I used to read my fair share of paranormal romance. I really enjoyed some of Lynsay Sands’ historical romances though, so I thought I’d give this one a spin. Pro tip: They’re not vampires, they’re Atlanteans with some highly advanced technological stuff that basically give them characteristics of what we’d call a vampire. I love that Sands gives a scientific, technical reason for why the “immortals” are the way they are, and I DO happen to have a weird thing for Atlantis and Atlanteans, so it turned out this book was actually right up my alley after all (surprise!)

This is such an exciting book and I’m not quite sure how to classify it. There’s definitely an element of romance, but also some murder mystery intrigue, some detective/cop type storyline, paranormal themes… A little bit of something for everyone, really. The writing is phenomenal, and I only put this down once (and very grudgingly) when I needed to do some adulting, so thankfully I started this on a Sunday morning and was able to power through and read it in mostly one big gulp. The murder mystery plotline totally kept me guessing, which I appreciate because sometimes you can see “who done it” coming a mile away. Not so much for this one!

I really liked Elspeth, who is a very strong female character dealing with a SERIOUSLY controlling mother. Wyatt was also really great, and I love his background as basically the Canadian version of the Navy SEAL turned bodyguard, which really comes in handy when it turns out someone is seriously intent on killing Elspeth. I like a little more romance in my romances, where this one seems to focus more on the murder mystery type plot and on Elspeth’s issues with her family. And why do lifemates pass out after sex? Is there a logical explanation for this? Because it just doesn’t make sense unless as a plot device to make things happen while they’re K.O., which bugs me a lot especially after the careful explanation of why immortals are the way they are.

A lot of time is spend on going into the backstories of various side characters, which I guess makes sense with 26 previous books in the series, but it got to the point that I felt it kind of took away from the main storyline(s). That being said, there had better be a book about G.G., because I need to read more about him right now!

This is the 27th book in the Argeneau series, but each book is written to stand on its own. There are a LOT of side character, including at least half a dozen couples that I assume are the main characters in earlier books. There are a few references to past escapades of some of these couples which may or may not actually be described in prior books. That being said I don’t think there are any serious spoilers for earlier books, and despite there being about a billion character to keep track of, you’re fine reading this one without reading any of the earlier books. The only downside is that I enjoyed this book so much that now I need to go back and read the previous 26 books. Good lord, that’s a lot of books…!!

To celebrate the release of TWICE BITTEN, we’re giving away five paperback copies of A QUICK BITE, the first installment in the Argeneau series by Lynsay Sands!

GIVEAWAY TERMS & CONDITIONS:  Open to US shipping addresses only. Five winners will each receive a paperback copy of A Quick Bite by Lynsay Sands.  This giveaway is administered by Pure Textuality PR on behalf of Avon Romance.  Giveaway ends 4/6/2018 @ 11:59pm EST. Avon Romance will send the winning copies out to the winner directly. Limit one entry per reader and mailing address.  Duplicates will be deleted.  CLICK HERE TO ENTER!

LYNSAY SANDS is the nationally bestselling author of the Argeneau/Rogue Hunter vampire series, as well as numerous historicals and anthologies. She’s been writing stories since grade school and considers herself incredibly lucky to be able to make a career out of it. Her hope is that readers can get away from their everyday stress through her stories, and if there’s occasional uncontrollable fits of laughter, that’s just a big bonus. Please visit her on the web at http://www.lynsaysands.net.

Already missing Halloween, I'd better order some Christmas cozies...
I'm thinking about adding some romance tropes & fanfic stickers to my Etsy shop... Below are some examples. What are your thoughts? They'd be 2" round vinyl stickers for $2.50 each. Should I sell them? Which 3 designs should I start with? Are there other designs you'd want to see that I missed? (Fake dating I have MM and FF as well)
My little helper (Storm, aka Princess Fartybutt) decided to "help" me while I was making crescent moon wreaths last night. 🤣 I'm putting up several of the wreaths I made today at 3 pm CST in my Etsy shop! Storm and I hope you'll come check it out. 💕
Did a couple of tests strands because I'm thinking of doing a BIG CHOP and then putting orange and green streaks in my hair. I wanted to see if the colors would show without needing to bleach, and I think I love it. 💕 Now to just wait for my awesome sister in law to have some free time to come do me a good hair chop! #happyfallyall
I'm back in the office one day a week, and I decided to explore my lunch break walking path options today.
Not too shabby for my first foray into jewelry making!! Bumblebee jasper pendant with labradorite, tiger eye, and gray onyx beads. 💕