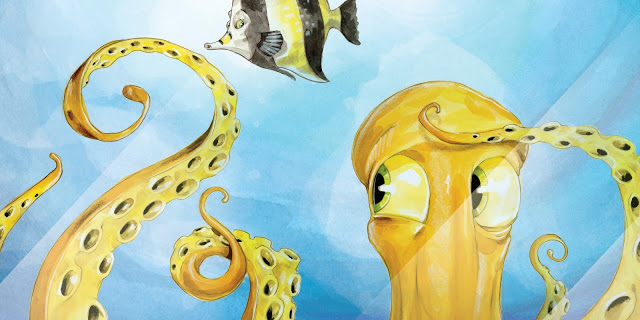 Author: Erin Guendelsberger
Illustrator: David Leonard
On-Sale: 4/3/18
ISBN: 978-1-4926-5414-8
$17.99 HC
Juvenile Fiction/Picture Book
Goodreads  Amazon
ABOUT THE BOOK:
Inky is bored with aquarium life—he wants to start a new adventure in the ocean! But just how can an octopus in a tank get to the open seas…?
Inky is not just a character from a tall tale – he’s the real-life escape artist from the National Aquarium of New Zealand. One morning in April of 2016, the aquarium’s keepers discovered that Inky was missing. His tank-mate Blotchy stayed behind, but the keepers traced Inky’s tracks to Hawke’s Bay. This story chronicles the adventure that the real-life Inky might have taken on his escape to freedom in the open ocean!

My Review: Rating 5 Stars ★★★★★
Adorable story about a captive octopus named Inky who escapes his tank because he wants to explore the sea. Told from Inky’s point of view in a rhyming scheme with good rhythm and flow to it. The illustrations are gorgeous and fun. I especially like at the end there are a few pages that talk about the real Inky the octopus, some other unique octopi, and octopus fun facts.
About the Author:
Erin Guendelsberger writes stories and poems. Her work has appeared in picture books and magazines. She studied writing at Hamline University and Bowling Green State University. She now pursues adventure in Ohio with her husband, daughters, dog, and cats.

4 thoughts on “Spotlight Tour: Inky the Octopus by Erin Guendelsberger”