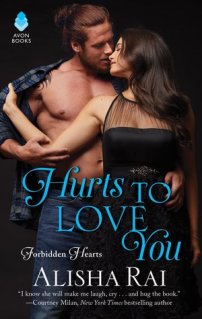 Hurts to Love You

Summary: Well-behaved women don’t lust after men who love to misbehave.Heiress Evangeline Chandler knows how to keep a secret . . . like her life-long crush on the tattooed hottie who just happens to be her big brother’s friend. She’s a Chandler, after all, and Chandlers don’t hook up with the help. Then again, they also don’t disobey their fathers and quit their respectable jobs, so good-girl rules may no longer apply.

Gabriel Hunter hides the pain of his past behind a smile, but he can’t hide his sudden attraction to his friend’s sheltered little sister. Eve is far too sweet to accept anything less than forever and there’s no chance of a future between the son of a housekeeper and the town’s resident princess.

When a wedding party forces Eve and Gabe into tight quarters, keeping their hands off each other will be as hard as keeping their clothes on. The need that draws them together is stronger than the forces that should shove them apart . . . but their sparks may not survive the explosion when long-buried secrets are finally unearthed.

Review:
I love Eve and I want to give her a big, huge hug and tell her that everything is going to be OK. Come to think of it, I also want to do the same with Gabe… They’re both so amazingly strong and spectacular, while at the same time so very damaged and flawed. I love deep, multi-dimensional characters, and Alisha Rai sure delivers! Bits of their stories and how they came to be the people they are at the start of the story are revealed throughout the book in a way that helps the reader to understand them (and relate to them) on a deeper level, without being slammed with all these facts and details all at once so that it’s overwhelming. There is real artistry in Alisha Rai’s storytelling and character development, and I love how these leads (as well as their crazy families) grow and change throughout this book.

Hurts to Love You has so many great themes/tropes. I’m not normally a fan of May/December romances, but it really works for Gabe and Eve. There’s also some best friend’s sibling vibes, as well as childhood crush ones. Then there’s the crazy Montague/Capulet thing between the Kanes and Chandlers. Eve’s relationship with her father, Gabe’s big secret… There are just so many great elements in this story that are masterfully woven together. At times I felt REALLY lost at all the interconnecting histories and relationships of the Kane/Chandler family drama, which I think reading the first two books in the series first might have helped me keep tabs of who is who better.

The heat level of this book is intense. Gabe has a tendency to make Eve say what she wants, as well as giving a verbal play by play of his fantasies, what he’s about to do, what he’d like to do, etc. etc. etc. It’s well written, a little rough, and HOT. Eve puts it best:

This is the third book in the series, and while it can be read as a stand alone there are definitely spoilers for the first two books in this one. There are also a LOT of characters with a very tangled family history, so while this can be read as a stand alone, you’re probably better off reading the first two books in the series, Hate to Want You and Wrong to Need You, before reading Hurts to Love You (because, let’s be honest, you know you’re going to end up reading them all anyway.)