Mister Tonight by Kendall Ryan
Release Day – June 18
From New York Times bestselling author Kendall Ryan comes a standalone romance about a swoony single dad and the new neighbor he falls for.
Last night was the most embarrassing night of my life.
I was THAT girl.
You know, the highly intoxicated chick celebrating her thirtieth with her two best friends—the ones who are happily married. And the more I drank, the more I wanted to do something reckless to celebrate.
By reckless, I meant the sexy and alluring man dressed in a business suit standing near the bar. You know his type—tall, dark, and handsome. I was sure he was out of my league, but I’d had just enough alcohol that things like that no longer seemed to matter. I’m not fat, mind you, but you can tell I like French fries, so there’s that.
He took me home and I enjoyed the hottest birthday sex of my life, well until it came to a screeching, and rather unwelcome halt.
There’s nothing quite like being interrupted mid-ride with a little voice asking: “What are you doing to my daddy?”Just kill me now…… or so I thought.
Come to find out the man I rode like a bull at the rodeo is my new landlord.

✦Kindle US ➜ https://amzn.to/2sOaxUm
✦Kindle UK ➜ https://amzn.to/2GaHxdb
✦iBooks ➜ https://goo.gl/jgnMfa
✦Nook ➜ http://bit.ly/2JHnUfL
✦GoodReads ➜ https://goo.gl/y6tTZ4
✦ Google ➜ http://bit.ly/2G6KhIE
✦Kobo➜ http://bit.ly/2JIZLFQKobo
✦Audio ➜ https://adbl.co/2rLAhzj
Excerpt
Casual flings didn’t tend to handle the whole single-dad thing well. Single moms, on the other hand, fucking loved it. The idea of a man devoted to his kid had them panting for days. But casual, no-strings hookups? To them, me being a dad screamed one of two things: I was either an irresponsible asshole who couldn’t properly wrap it up, or I was a total commitment addict trying to lure them in with my adorable four-year-old child in need of a new mama. Either way, it usually didn’t go over well. But so far, Kate was handling it fine.
Then she crossed the room toward me, and a single thought pervaded my brain.
Fuck, she’s sexy.
All those curves and her throaty laugh, coupled with her confidence? I was a total sucker for a confident woman who knew what she wanted.
“Happy birthday,” I whispered, placing my hands on her waist and drawing her in close.
Just because this would most likely be a one-time thing didn’t mean I wanted to rush through it. Quite the opposite, actually. I wanted to savor and enjoy every minute of this. Starting with the perfect kiss.
“It’s almost midnight,” she murmured, her lips just inches from mine.
Placing one hand on her cheek, I guided her mouth to mine, sealing my lips over hers in a slow, soft kiss.
She responded perfectly, opening her mouth in a silent invitation for my tongue to slide against hers. My hands found those curves wrapped under that black fuck-me dress I’d been admiring, and God, she felt even better under my palms than I could have imagined. Soft and warm and so inviting.
I pressed one more slow kiss to her lips and pulled back to study her reaction. I rarely did this kind of thing. Having her here was surreal . . . and really fucking turning me on, knowing what was probably about to happen.
“Can I get you something to drink?” I asked, slipping my hand around her waist. If she’d changed her mind or wanted to slow things down, I wanted her to know that was fine too.
“I can think of other things I’d rather be doing with my mouth,” she replied, her voice low and sultry as she ran her fingertips over my chest.
God, I love a woman who knows what she wants. 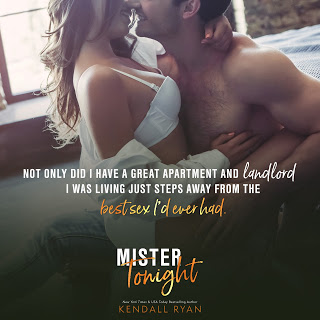 ABOUT THE AUTHOR:
A New York Times, Wall Street Journal, and USA Today bestselling author of more than two dozen titles, Kendall Ryan has sold over 1.5 million books and her books have been translated into several languages in countries around the world. She’s a traditionally published author with Simon & Schuster and Harper Collins UK, as well as an independently published author. Since she first began self-publishing in 2012, she’s appeared at #1 on Barnes & Noble and iBooks charts around the world. Her books have also appeared on the New York Times and USA Today bestseller lists more than three dozen times. Ryan has been featured in such publications as USA Today, Newsweek, and InTouch Magazine.
Visit her at: www.kendallryanbooks.com for the latest book news, and fun extras
Subscribe to Newsletter

Ughhhhhhhhh I have read all 44 volumes of Skip Beat that are out since Jan 1. I read vol 37-44 today and I am back to waiting foreverrrrrrrr for the new volumes to release. Thankfully vol 45 comes out on Tuesday! *grabby hands* I need it nowwwwwww!!
We actually got some sun today! Remy took advantage with a little sun nap on the back of the couch. (He thinks he's a cat.)
Made cookie bars and took my adorable rainbow bunny trivet from @flannelandantlers on its maiden voyage. 💕
My TBR is set and I'm ready for #breezyhollowreadathon !
My new tarot deck came with 4 different versions of The Lovers card, so you can customize your deck. 💕 (I went with the one in the top right.)
My 6 year old helped me make chocolate covered strawberries today for Valentine's Day 🍓🍫💕 (They turned out pretty tasty!)