In which Peekaboo and I look at some book covers and get snarky, and I end up adding way too many books to my Kindle Unlimited TBR. /sigh

WARNING: Swear words ahead. Not a lot of them, but the effin-heimer is dropped a few times. You’ve been warned. 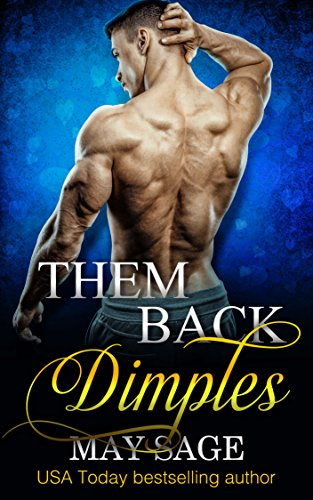 Peekaboo: His back looks like someone took a wrinkly old man back, and photoshopped muscles onto it.

Elley: Also I think there might be a couple of babies trapped under there.
Peekaboo: Dear god I think you’re right.
Elley: Is that… is that the actual book title? Them Back Dimples?
Peekaboo: What if the whole book is about her seeing what she can fit in/drink from those back dimples?
Elley: I mean, what ELSE could it possibly be about?
Peekaboo: The small furry animals attempting to escape from under his skin? IRL tho, he hires her to be his maid, and then refrains from wearing pants. Not at all sure what back dimples have to do with anything. Except that his are cavernous.
Elley: I know we’re supposed to be talking about covers, but what the heck is up with the titles in this series? Bring on the Psychobitch and Scrooge McFuck? I am DYING.
Peekaboo: Wait, one of them is Scrooge McFuck? Can we buddy read that? That sounds recockulous. Oh hey, I actually own Shy Girls Write It Better by her. I haven’t read it yet though.
Elley: Read it and if it’s any good, then I’ll shell out the $3.82 for Scrooge McFuck for a buddy read. OK, enough of this series. Next cover. 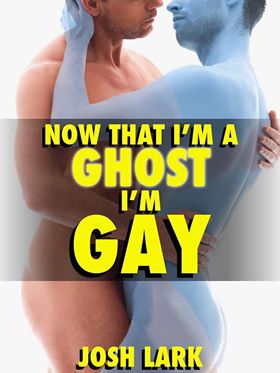 Peekaboo: Dear sweet ,ptjer pf kesis
Elley: I appreciate that they made the ghost man kind of see through, but why is the non-ghost man so frowny?
Peekaboo: He’s trying to kiss the ghost, but can’t fully spot where his lips were.
Elley: I think it’s because he has ghost-breath.
Peekaboo: Particularly rancid? I studied real hard to see if we could see a peen through ghost man’s translucent butt, but no luck.
Elley: OMG I did too!!
Peekaboo: Maybe that’s why he’s frowning! When I died, I turned gay and lost my penis! OR that’s what happens when you fuck a ghost?
Elley: It froze off. Ghosts are cold.
Peekaboo: Bahaha! They went for a fun bout of frottage, and they both snapped off at the same time? 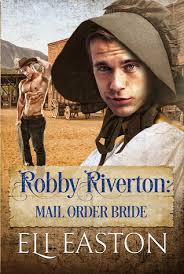 Elley: I am looking through KU and I keep finding books I actually think I need to read.
Peekaboo: LOL, curb yourself!
Peekaboo: I appreciate that they just photoshopped the dudes head on there. Saves money. …Okay but this mail order bride one kinda looks cute tho.
Elley: I KNOW, that’s why I said I need to read it! 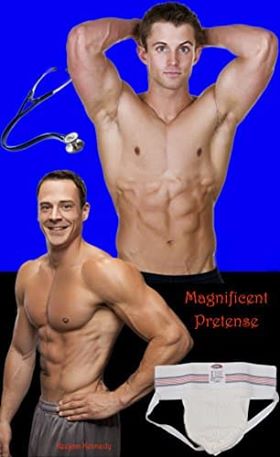 Elley: Speaking of photoshop…
Peekaboo: Is that an actual book cover?
Elley: Yes. Yes it is. $3.99 on Amazon and it has 12 reviews and a 4 star rating! OK, stock photo of guy 1… stock photo of guy 2… let’s throw in a stethoscope because one is a doctor. I’m not sure why the underpants?
Peekaboo: And not even cute underpants.
Elley: Oh I think it’s a jockstrap! So it’s about a doctor and a jock?
Peekaboo: Uggh, put a basketball on there. Or a football. Or literally ANYTHING but a jockstrap.
Elley: Ew! He’s a high school baseball player that needs a medical examination from the family doctor.
Peekeboo: What! What!? He better be 18!!
Elley: Yes, he’s 18.
Peekaboo: Still gross.
Elley: From the description: “This short novel is approximately 40,000 words. This work contains taboo themes, a doctor and jock medical examination, bondage, discipline, raunch, foot worship, a brief foray into water sports, dad/son role play, dominance, submission, sports gear/uniform fetish, provocative secrets and bareback graphic sex. All characters in this novella are eighteen years of age or older.” … That’s… a lot of stuff for 40k words.
Peekaboo: Oh sweet Jesus, that sounds fucking awful. I suppose that’s about 80ish pages. It just doesn’t leave a lot of time for anything else… Like plot. 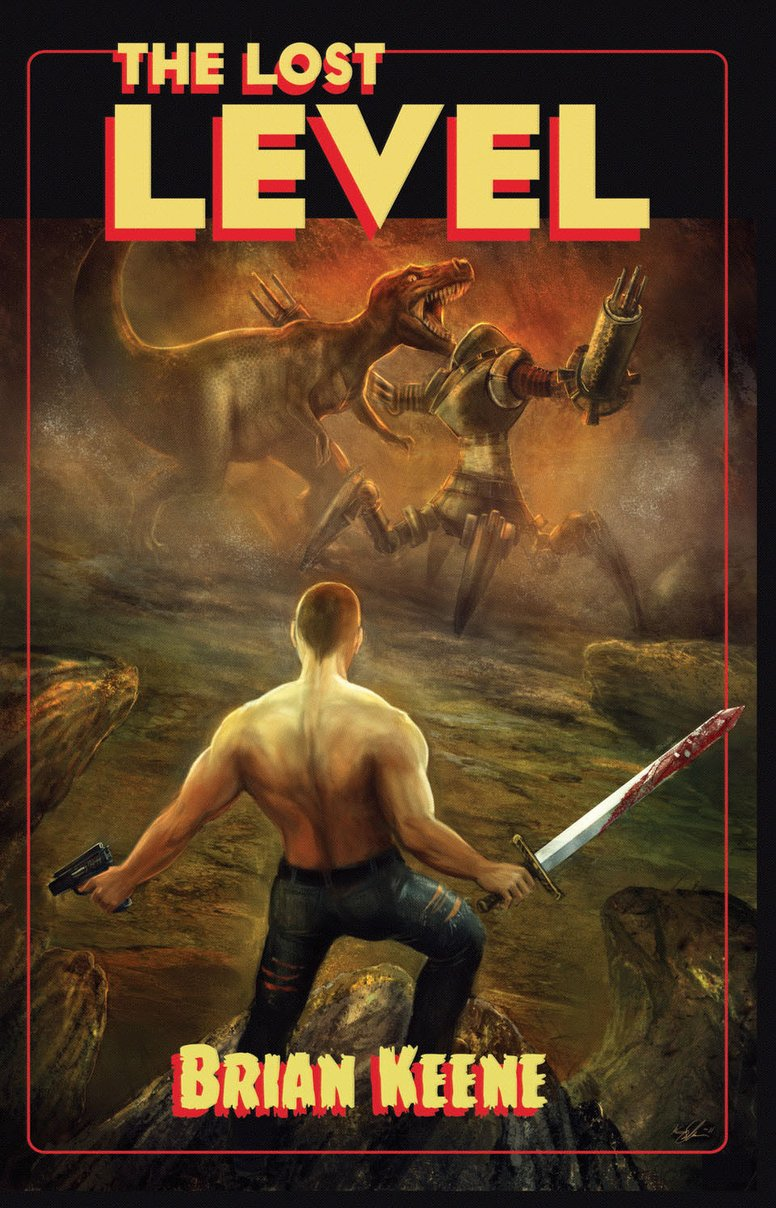 Elley: I do not even know where to begin.
Peekaboo: I’ve always hoped someone would burst into my bedroom like this, maybe sans the gun and sword. But with the muscles and tight pants.
Elley: Also with the dinosaur and killer robot?
Peekaboo: Oh absolutely.Of the three of them, who would win? Because he looks SIGNIFICANTLY smaller than either of them.
Elley: But he has a sword AND a gun!!
Peekaboo: It’s funny his sword is bloodied, but his weirdly oily body remains clean.
Elley: Even though his pants are clawed up.
Peekaboo: Very strategically. He should probably have a name. … Steve Buckthorn.
Elley: LMAO! I love it. That is his name now. 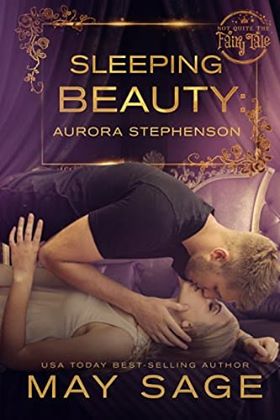 Elley: Is he… levitating over her? IS HE A VAMPIRE?!
Peekaboo: Oh man, I wonder if they shot this standing up?
Elley: Omg, I think he actually is a vampire. “For years, she’s cared for, cared about one person beyond anyone else. Nevermind the fact that King Rupert isn’t exactly what one would call alive.”
Peekaboo: Oh shiiiiittttt. He’s definitely levitating then. Maybe her body is made of glass? Why else wouldn’t he want to get up all up in der?
Elley: He is either levitating with his vampire king powers, or doing an AMAZING one armed pushup.
Peekaboo: I’m voting for the pushups. If they didn’t have his weird levitation moment, I think I would actually quite like this cover.
Elley: Yeah it’s not bad. I’m struggling to find ones as great as Them Back Dimples.
Peekaboo: Nothing will ever be as great as Back Dimples. 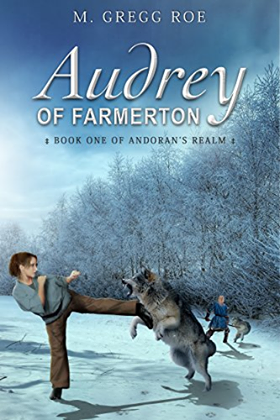 Peekboo: Dat bitch is straight up kicking a wolf. What did that poor wolf ever do to her!?
Elley: What is she wearing? I’d think this is a contemporary except the guy in the back looks medieval fantasy style.
Peekaboo: Looks like nursing scrubs. Maybe it’s time travel? I got too scared to read the description.
Elley: Also I’m pretty sure they took a standing person and photo shopped the torso on an angle, and also copy paste rotated the “kicking” leg from standing to kicking. There is NO movement or flow in her pose at all.
Peekaboo: OMG you’re right. This is like a ten minute job in someone’s basement.
Elley: There must not have been a stock photo of a medieval fantasy farm girl doing karate.
Peekaboo: Looks like someone just wrote up their D&D adventure to sell. …Huh. At least find a good cover for it, dudes.
Elley: I’m pretty sure the torso is of a karate uniform and they colored it blue to make it look for medieval appropriate.
Peekaboo: This makes my heart weep.
Elley: I like how in the description they say that it’s “a slice-of-life, coming of age, sword & sorcery novel that really doesn’t fit any of the traditional fantasy genres.” Mmhmm, ok. Sure. It’s a sparkling unicorn of a book. 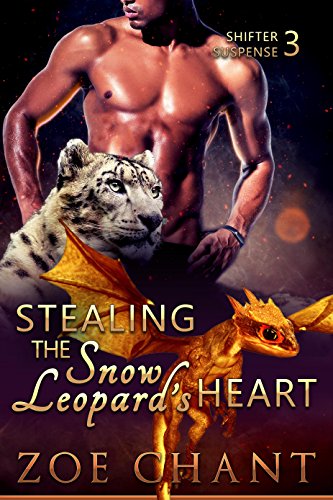 Elley: Speaking of photoshop…
Peekaboo: 1) I love that tiny little dragon, and I hope the book is just about it, and b) this cover is fuuuucking awful.
Elley: What is wrong with his stomach? Is that a burn scar? Or supposed to be a tattoo? Badly photoshopped muscles?
Peekaboo: It rather looks like a crater.
Elley: Sooo burn scar crater from the tiny dragonthing?
Peekaboo: I am already rooting for the dragonthing. Fuck this dude and his weird muscles.
Elley: When he shifts into a snow leopard, does he still have a weird stomach crater? That’s what I wanna know.
Peekaboo: Poor little leopard. 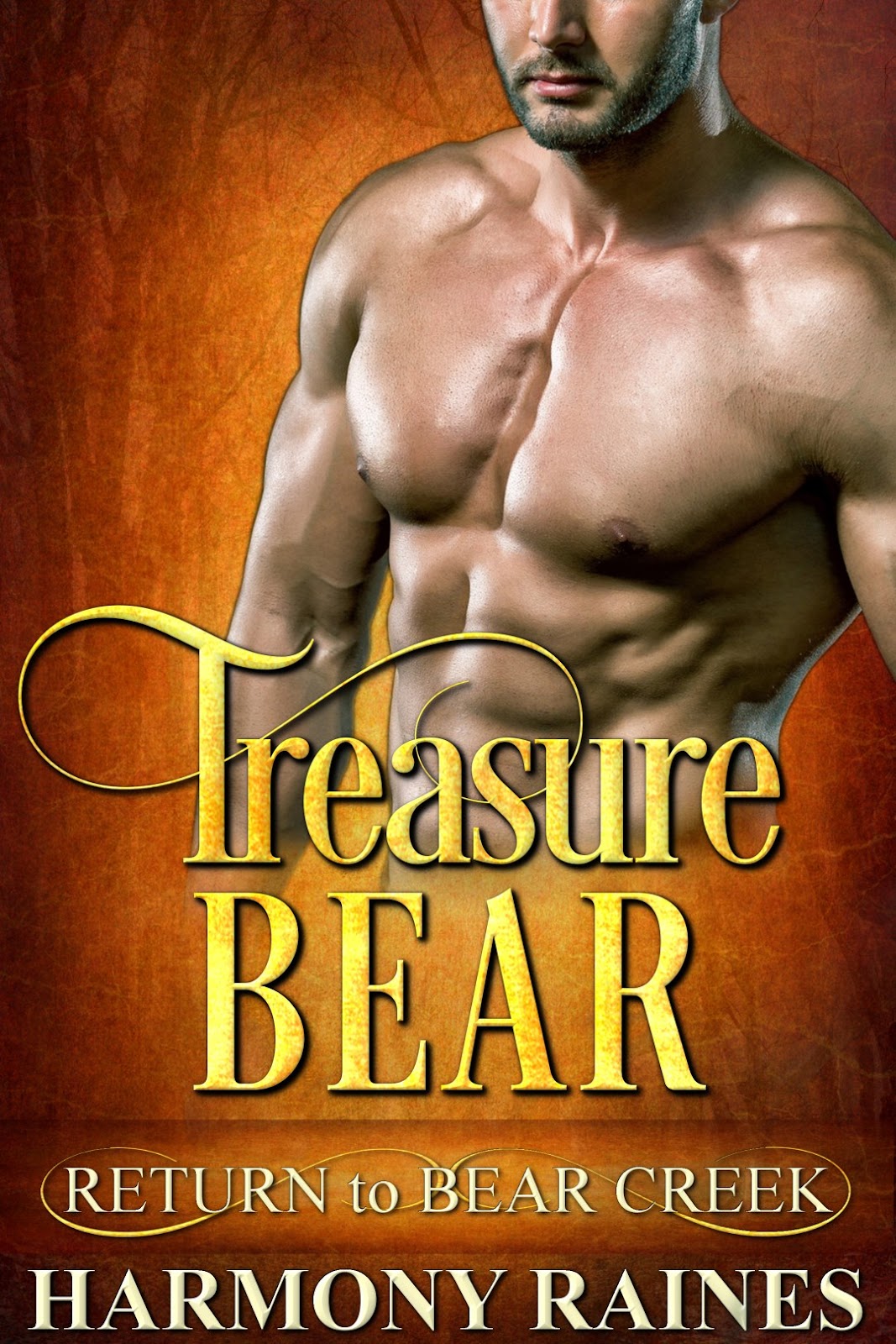 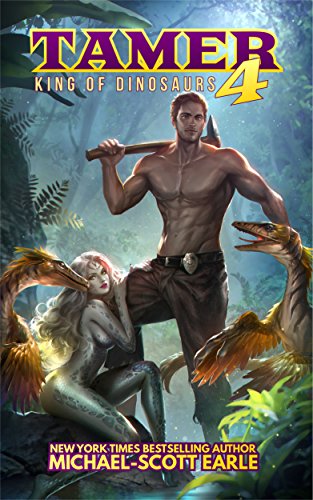 Elley: This is stunning, but also makes me go WTF? Is she a dinosaur? A sexy dinosaur?
Peekaboo: Agreed. I hope so. I wish I was. Also that looks like Chris Pratt.
Elley: Did he go back in time? If he did, why does he need a police badge? Do the dinosaurs care that he’s a cop? So many questions.
Peekaboo: I didn’t even notice the badge! That’s amazing! Are you reading the tag line? “Control dinosaurs. Tame women. Rule the world
. “
Elley: Oh. My. God. “Then Victor is abducted by aliens and deposited on a prehistoric world filled with hungry dinosaurs and beautiful alien women.” What? ….what??
Peekaboo: Three women! He has three women! And they all have different hair colors.
Elley: Also! He cleans cages for animal control before he’s abducted by aliens. You need a badge for that? One is a spider lady!! 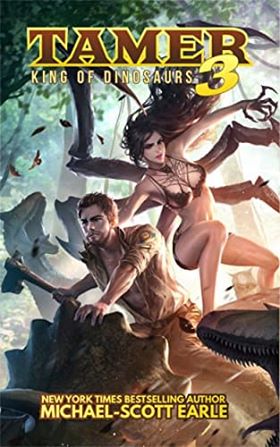 Peekaboo: This is 100% some dudes weird wank fantasy he wrote after a sad day at the office. In other news, Victor looks hotter with a bit of scruff.

Elley: PEEKABOO. Book 1 is 792 pages.
Peekaboo: Holy shit what?!
Elley: Book 4 is 532 pages.
Peekaboo: Who has this much time to dedicate to wank fantasies?!
Elley: …I think these are, like, actual legit books.
Peekaboo: They’ve got good reviews on Goodreads.
Elley: Omg look at one of his other series!
HE IS A SPACE TIGER KING, PEEKABOO.
Peekaboo: THIS IS AMAZING. I want my whole Camp Nano book to be about this guy now.
Elley: How horrible am I that I kind of want to read these?
Peekaboo: Right?! They’ll either be utter garbage or surprisingly good.
Elley: The tiger one is “a paranormal space opera adventure” and has 11 books in the series so far.
Peekaboo: Are they all as long as dinosaur harem man?
Elley: All of them 400-500 pages plus. WHO IS THIS GUY?
Peekaboo: So… Buddy read?
Elley: Damnit we have so many buddy reads to do but YES. 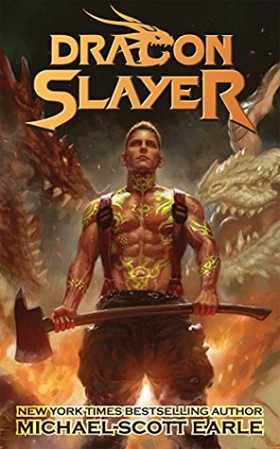 Peekaboo: That guy has like 20 sets of abs.
Elley: I think some of them are extra sets of pecs.
Peekaboo: Oh you’re right. He kind of looks like a fireman who fell into a wrong dimension.
UPDATE: HE IS. Also his tattoos are magical.
Elley: Hahahahahahahaha I am dying!
Peekaboo: This dude must really like harem situations, because so far every one of his heroes has at least three girlfriends at a time.
Elley: Holy shit!! From the author’s bio: “His debut novel, The Destroyer, was published in February of 2016, and has earned critical. acclaim. He has currently published 43 novels spanning the genres of dark fantasy, epic fantasy, space opera, cyberpunk, horror-comedy, and guy lit.” 43 novels… LONG ASS ONES that from what I’m reading so far are actually fairly well written… in 2 years. What am I doing with my life???

And yes, I ended up adding several of Michael-Scott Earle‘s books to my Kindle Unlimited TBR list, as well as Robby Riverton: Mail Order Bride, lol.

What do you think about this type of post? Is this fun for you to read, or totally dumb? Also, are there some CRAZY book covers you’d like to share with us? Let us know in the comments! 🙂