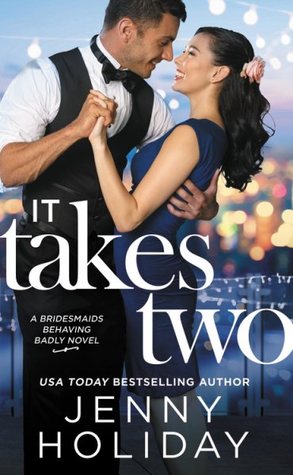 All’s fair in love and war

Wendy Liu should be delighted to be her best friend’s maid of honor. But after years spent avoiding the bride’s brother – aka the boy who once broke her heart – she’s now trapped with him during an endless amount of wedding festivities. Luckily she’s had time to perfect her poker face, and engaging Noah Denning in a little friendly competition might just prove that she’s over him for good…
Noah Denning is determined to make his little sister’s wedding memorable. But it seems Wendy is trying to outdo him at every turn. Challenging each other was always something he and Wendy did right, so when she proposes they compete to see who can throw the best bachelor or bachelorette party in Sin City, Noah takes the bait – and ups the stakes. Because this time around, he wants Wendy for keeps. And when you’re fighting for love, all bets are off.

How does this book manage to be so many things?! It’s a friends to lovers story sort of, but also an enemies to lovers story in some ways. It’s a little bit childhood sweetheart story, and a lot of bit best friend’s sibling.

I love how real Holiday’s characters are. Wendy and Jane are BFFs, calling themselves the Lost Girls and card-carrying members of the Dead Dads Club. They both had this traumatic event in their childhoods, their dads dying and then both pretty much losing their moms at the same time, one to work and the other to grief. Now Jane is getting married and Wendy is feeling pretty insecure, lost, and alone. But she’s a total badass lawyer lady and doesn’t DO vulnerable, especially not where Jane’s brother (and Wendy’s childhood crush) Noah can see it. Noah has his own damage, having had to grow up way too fast to support his mom and sister (and by extension his sister’s BFF Wendy…)

The chemistry and banter between Wendy and Noah is explosive. Arguing is like their happy place, which makes sense because he’s a prosecutor and she’s a defense attorney. (Also, WTG Jenny Holiday for humanizing and making me like and care about a couple of lawyers.) I really appreciate that they’re not perfect people, they’ve both got some major issues, but they manage to work through them in the course of the book. I feel so much for Wendy, who is so alone in the world and struggling with “losing” her best friend to marriage. I also love her cackling laugh, haha. I’m not a travel person myself, but Wendy’s plans and stories about travel made me want to be the type of person that does that.

It was also lovely to catch up with some of the other characters I met in the first book in the series, One and Only. I loved Jane and her fierce struggle to make her wedding the most “low-key.” And OH MY GOSH, Bennet. Please can I have a sexy Cajun chef/restauranteur to keep for myself? I need more of him (and lucky me, he’s one of the leads for the next book in the series – YESSSSSS!) I basically want to go hang out with their entire friend group. I will even make macrame table settings or wear a tartan bridesmaid dress, I promise. 🙂

I have found that I love when romance novels sort of break the fourth wall and say things about certain things only happening in romance novels. It’s like a tongue in cheek insider nod, “yeah, we know this is a romance novel… but the characters don’t.” It Takes Two delivered on that little thrill for me in a couple of ways, this one being my favorite:

“‘I hate to turn this into a bad Hollywood rom-com, but you are going to have to hide in the shower.'”

This is the second book in the Bridesmaids Behaving Badly series. While it can probably be read as a stand alone, you’re much better off reading the series in order and reading One and Only before diving into It Takes Two. Jenny Holiday mentioned in an interview or on Twitter or somewhere that the series is set up with a sort of domino effect, with the rather reluctant bridesmaids from the wedding in the first book falling like dominoes in subsequent books at the weddings of the couple in the previous book. There are definitely spoilers in this book for the first book, and probably a few things they talk about that will leave you like “huh?” if you haven’t read the first book. That being said, I NEED THE THIRD BOOK RIGHT NOW! *grabby hands* There’s some set up in this book for book 3, Three Little Words, and I already want to lick Bennet like an ice cream cone.

2 thoughts on “Book Review: It Takes Two by Jenny Holiday”