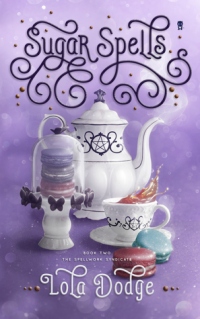 Summary
After her run-in with a jealous warlock, apprentice baker Anise Wise can’t wait to get back the kitchen where she belongs. But thanks to her brush with death, the land of the living isn’t all cupcakes and marshmallows.Anise’s magical mojo is way out of whack and her evolving powers are stirring up trouble. As the town buzzes with news that Anise can bake deathly spells, unsavory characters start lining up for a taste. They’ll stop at nothing for the chance to use Anise and her witchcraft to further their own plots.She plans to hole up researching magic recipes until the attention dies down, but then she discovers the horrifying terms of her bodyguard’s contract. Wynn has saved her life so many times, she can’t leave him trapped. But doing the right thing will mean risking death or worse—being cast out of her dream job.For this witch, justice might not be as sweet as advertised.

Review
OK, maybe this wasn’t the best book to read while on a low carb diet, haha. Once again this book goes pretty heavily into the details of the things Anise is baking, so if you’re into watching The Great British Bake-Off and Charmed then this book might be for you! If cooking shows bore you, you might want to move along… After her exploits in Deadly Sweet, Anise’s fire magic is left tainted with death magic and she can’t bake. If you’ve read the first book in the series, this is basically game over, life is ruined for Anise. (And if you haven’t read the first book in the series, what are you even doing here? This is the second book in a series, and no, it can’t be read as a stand alone. Go read Deadly Sweet first, then come back, you weirdo.) She’s desperate to get her baking mojo back – by any means necessary, even it if means baking murder macaroons for a local vampire who is not-quite-right-in-the-head. Especially once she finds out the terms of Wynn’s contract, and realizes that there’s a way she can use this unwanted power to his advantage. I love that we get a look inside Gabi’s family’s cryptozoology vet clinic in this book! I’d have loved to get a little more of a look into that aspect of the world, but they pretty much say that because of Anise’s fire magic (to say nothing of being tainted with death magic) she’ll have a hard time getting the creatures to warm up to her, so she doesn’t get to go exploring much. It feels like there are a lot of little threads of possible storylines that get sort of picked up in this book and then never actually lead anywhere, which was disappointing. Still, it was a fun story, and I enjoyed reading about Wynn opening up a little more with Anise, as well as reading about her power continuing to grow. BUT WHAT ABOUT SCHOOL?! SHE MISSED SO MUCH CLASS AND NOBODY CARES!! AHHH! The Ravenclaw in me is not OK with this!!