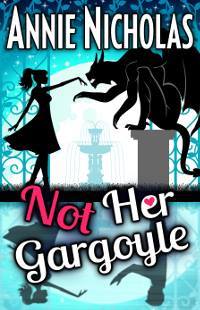 Summary
Ruby is done with jerks, dead-end jobs, and eviction notices. Everyone else she knows is finding ways out of this crappy neighborhood, so why can’t she? Since opportunities refuse to fall from the sky, Ruby makes her own. To hell with the little voice in her heart whispering about love. She never met a man she wanted to keep…then she met a gargoyle. Men were boring after all. Nick was a con, a thief, and a rogue. He couldn’t keep a dime in his pocket even if it was glued. Then he met a ruby. Not one from the earth but one of flesh and blood. And ass. Let’s not forget the ass. Stealing her heart was now all he wanted. He has a plan that could make both their dreams come true. It only involves an itsy-bitsy risk. All they must do is rob a witch. Oh, and avoid the dragons. Warning: Beware of despicable gargoyles with hearts of gold. They will sweep you off your feet when you’re not looking.

Review
The heroines in this series are all very down on their luck financially, and the other heroes are all pretty well off and sort of swoop in and save them from their destitution. I like that in Not Her Gargoyle we finally have a hero that is just as bad off – worse off, really – than the heroine, and she steps in and gives him a hand up and a place to stay. The shift away from the lifebonding/mated pair plotlines of the other books was also a nice change of pace. Like the other women in this series, Ruby is totally kick ass, and I appreciate her vulnerabilities. There is a scene between her and her downstairs neighbor that really spoke to me, where Ruby is basically being pushed into deciding if she is going to prostitute herself to her landlord to make up for her past due rent or be evicted, and her neighbor tells her:

“You do whatever you need to do to survive. Nobody cares about women like us and we need to stick together.”

HELL YES, neighbor lady whose name I can’t remember for the life of me right now but I really like you! Way to be. I also love the banding together between Nick and his brothers, who are adorable. Nick was super cute, and kind of clueless. Nick was a fun character, and the banter between him and Ruby was fun, as was reading about them both trying to change their lives around and “go straight” after leading rather shady lives. This is the 4th book in the Not This series, and while it can be read as a stand alone it’s really better if you read the series in order, otherwise you might find yourself a little lost. However this one probably reads better as a stand alone more than books 2 or 3, so I guess if you MUST skip ahead, go for it.