After five years away, Lady Eliza Cartwick isn’t relishing returning to the whirl of the London season. But the young widow knows to ensure the best future for herself and her young daughter Rosa, she must remarry. If only Lord Evanston, the dashing rogue who has haunted her dreams since she was sixteen, didn’t insist on distracting her with his searing looks and lingering touches at the most inconvenient times…
Thomas, Lord Evanston has wanted Eliza since her engagement ball all those years ago. His best friend’s sister has constantly been out of reach…until now. The forbidden has always tempted him, but when Thomas realizes he wants the object of his fantasies for far more than a dalliance, he must convince her that he’s not just a rake; he’s a viscount who’s worth the wait.

Tick, tock. Tick, tock.
The ancient grandfather clock in the corner kept a steady cadence as Eliza stood in the open window of the drawing room. She watched in silence as the guests arrived in gleaming carriages to proceed up the front steps of her home. Not that it would be her home for much longer. Or her drawing room either, for that matter.
A light breeze flowed through the casement, toying with the golden curls that hung softly alongside her face, and she enjoyed this rare moment of peace before the evening’s party when the chaos would begin. The chaos had long since started inside her head. At just sixteen years old, she was engaged to be married. It was to be officially announced tonight, and as could be expected, her thoughts were a whirling jumble of emotion. The fact that women were often married at such a young age did little to ease her anxiety, and she wondered how she could reasonably be expected to manage a change of such magnitude, even if her soon-to-be husband was a good sort of man.
The heady fragrance of honeysuckle perfumed the air, and she closed her eyes and breathed in, trying not to think about the difficult adjustments that lie ahead. The move that would take her halfway across the country and away from her family. Her new responsibilities as the mistress of a large estate. The changes she would face in becoming a man’s wife.
Her father had assured her that she would grow to love Hampshire, and her fiancé had spoken kindly of the residents of the closest neighboring estate. There was even a girl who was about her age; the daughter of a duke. Eliza took an unsteady breath and placed a shaky hand over her abdomen. She hoped the girl was nice.
Eliza didn’t quite feel ready—not that any young lady ever did—but her father was convinced she would find no better man. Reginald Cartwick was wealthy and smart. A landed gentleman who was accomplished and had proven himself to be valuable in matters of business. And she was fortunate. Compared to other marriageable candidates, he was relatively young.
She held no burning passion for him, but this was something that could change, she supposed. At any rate, he had the makings of an excellent marriage partner, and she had already come to think of him as a friend despite the brevity of their courtship. Perhaps friendship could transform into love, although this wasn’t necessarily a reasonable expectation.
Eliza’s chest ached at the thought. She longed for love.
Tick, tock. Tick, tock.
A glimpse of a black-haired man below quickened her pulse. It was Thomas, Viscount Evanston, a good friend of her brother’s and an unabashed rake. He was notorious in the London clubs, and notorious with the ladies, too.
Looking at him now, moving deftly around the small group of people who had gathered and waving ahead to someone else, she knew why. He was tall and muscular, broad-shouldered, and handsome like the devil.
Sinful like the devil too.
Eliza moved to the side of the window so she could continue to watch him undetected. At twenty-five years of age, he was a full nine years older than her, a disparity that seemed like a vast chasm of life experience that she did not possess. With his father’s death and the acquisition of his title, Thomas had chosen to live his life by indulging in a few select vices: women, brandy, cards…in that order.
Of course, she’d heard stories from friends—cautionary tales, spoken in hushed and giggling voices—of his prowess among the ton. Had seen evidence of it herself at the start of this year’s season. And even after it had become abundantly clear that Reginald Cartwick was her father’s favored suitor, she still couldn’t help but feel a curious tug of envy each time she’d watched Evanston flirting with a woman, or casting a meaningful glance at a beautiful widow as he took his leave for the night.
In a timely and accurate illustration of her thoughts, Lord Evanston greeted a female guest on the drive below. She couldn’t quite make out the identity of the woman due to her elevated vantage point and the lady’s oversized hat, but the fluttering hand that came to rest upon her heart indicated the lady’s pleasure at his approach. Eliza supposed she was lucky that he’d never shown her the barest amount of interest, for she was half-afraid she might spontaneously catch fire if he did.
She recalled one time her father had caught her gazing a little too long in the viscount’s direction, and that evening, he had been very clear regarding his feelings on the matter; feelings that were loudly echoed by her brother William. Evanston was to be seen as a family friend. Period. Anything more than that was not even a consideration. Tonight, her engagement to Mr. Cartwick would be officially announced and this was absolutely for the best. He was a good man. A responsible, well-respected man. And she was happy.
Tick, tock. Tick, tock.
There was the clock again, counting down her final minutes as the heretofore unengaged Lady Eliza Halstead. She would miss many things from this place when she left but would be glad to rid herself of that tick-tocking reminder of the impermanence of life. Was there a grandfather clock at Greystone Hall? If so, there wouldn’t be for long.
A sharp knock at the door shook her out of her reverie, and she blinked in surprise. Her moment of privacy was at an end, and someone had come to collect her from her refuge in the drawing room. Eliza inhaled deeply and crossed to the door, then twisted the knob and opened it.
Lord Evanston stood before her. 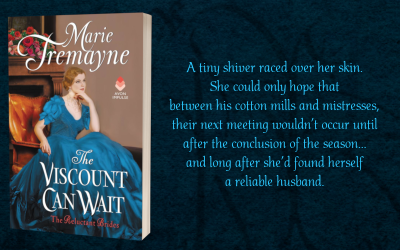 To celebrate the release of THE VISCOUNT CAN WAIT by Marie Tremayne, we’re giving away three paperback copies of Lady in Waiting!

GIVEAWAY TERMS & CONDITIONS:  Open to US shipping addresses only. Three winners will each receive a paperback copy of Lady In Waiting by Marie Tremayne.  This giveaway is administered by Pure Textuality PR on behalf of Avon Romance. Giveaway ends 10/26/2018 @ 11:59pm EST. Avon Romance will send the winning copies out to the winner directly. Limit one entry per reader and mailing address.  Duplicates will be deleted.  CLICK HERE TO ENTER!

MARIE TREMAYNE graduated from the University of Washington with a B.A. in English Language and Literature. While there, a copy of Pride and Prejudice ended up changing her life. She decided to study the great books of the Regency and Victorian eras, and now enjoys writing her own tales set in the historical period she loves. Marie lives with her family in the beautiful Pacific Northwest.

Doing a small relax with the kittens and my littlest. 💕
My mom's new babies, Thor and Storm. 💕
It's been a minute since I posted, so here is a picture of Remy the Wonder Dog!
Mondays.
Ughhhhhhhhh I have read all 44 volumes of Skip Beat that are out since Jan 1. I read vol 37-44 today and I am back to waiting foreverrrrrrrr for the new volumes to release. Thankfully vol 45 comes out on Tuesday! *grabby hands* I need it nowwwwwww!!
We actually got some sun today! Remy took advantage with a little sun nap on the back of the couch. (He thinks he's a cat.)