Although beautiful young widow Phoebe, Lady Clare, has never met West Ravenel, she knows one thing for certain: he’s a mean, rotten bully. Back in boarding school, he made her late husband’s life a misery, and she’ll never forgive him for it. But when Phoebe attends a family wedding, she encounters a dashing and impossibly charming stranger who sends a fire-and-ice jolt of attraction through her. And then he introduces himself…as none other than West Ravenel.
West is a man with a tarnished past. No apologies, no excuses. However, from the moment he meets Phoebe, West is consumed by irresistible desire…not to mention the bitter awareness that a woman like her is far out of his reach. What West doesn’t bargain on is that Phoebe is no straitlaced aristocratic lady. She’s the daughter of a strong-willed wallflower who long ago eloped with Sebastian, Lord St. Vincent—the most devilishly wicked rake in England.
Before long, Phoebe sets out to seduce the man who has awakened her fiery nature and shown her unimaginable pleasure. Will their overwhelming passion be enough to overcome the obstacles of the past?
Only the devil’s daughter knows…

The lines at the outer corners of his eyes deepened with amusement. “If the hero hasn’t turned up, you may have to settle for the villain.”
“If the villain’s the one who turns up, he is the hero.”

I mean, how are you not going to swoon at that? West is so thoroughly convinced he’s the bad guy because of his past (which if you’ve read any romances, historical or otherwise, is a pretty common trope). And while it’s true that he did do some pretty crappy things in his past, he’s also living his redemption story, which shows on every page in his interactions with the farmers he deals with, with his family, and with Phoebe and her sons. As a mom as two small boys myself, it just KILLS me the way West is with her boys – he clearly loves them a lot, which makes West pretty impossible not to love, completely and utterly. And I super love when Phoebe’s father steps in, because he’s basically shaking his head like “Oh kid, you have no idea…” Like, I want to give West a copy of Devil in Winter so he can read about Phoebe’s dad, and then maybe he wouldn’t worry quite so much, haha.Phoebe is also a really amazing woman. She gives her heart fully to her first husband, Henry, knowing that he is ill and that their life together will be difficult and likely all too brief. I love that she married her childhood sweetheart and first love and that they have all these stories and history together, but now that he’s gone and she’s out of mourning she basically needs to find herself again as her own person. There’s a little bit of an enemies to lovers flair to her relationship with West because of West’s past with Henry, which I really adore – especially when the story behind the book comes out (and that’s all I’ll say about that, because I don’t want to spoil anything!) As charming and wonderful as the blooming romance and growing friendship between Phoebe and West is, Devil’s Daughter is as much about the growth of West and Phoebe as individuals and them learning to love and trust themselves as it is about them learning to love and trust each other.This is the fifth book in The Ravenels series, and while it can be read as a stand alone there are a LOT of characters from both The Ravenels andThe Wallflowers coming together in this one. There are also some spoilers for The Ravenels book 4, Hello Stranger, so watch out for those! 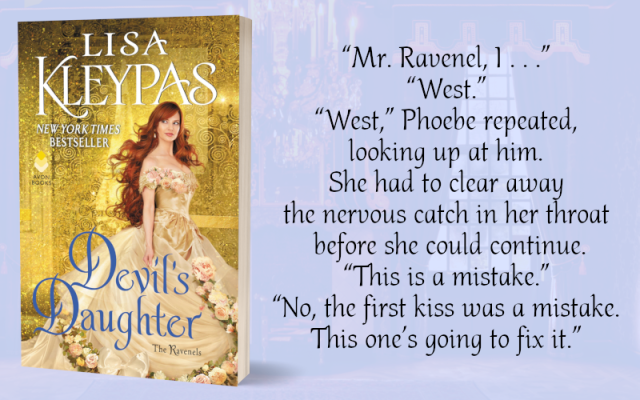 “If you have any misguided thoughts about taking me into your bed, you would find it a vastly mediocre experience. I’d be on you like a crazed rabbit, and half a minute later the whole thing would be over. I used to be a proficient lover, but now I’m a burnt-out libertine whose only remaining pleasure is breakfast food. Speaking of which—”
Phoebe reached for him, brought herself up hard against him, and interrupted him with her mouth. West flinched as if scalded and held very still in the manner of a man trying to withstand torture. Undeterred, she wrapped her arms around his neck and kissed him as passionately as she could, touching her tongue to his stiff lips. The feel and taste of him was exhilarating. Suddenly he responded with a primitive grunt and his mouth clamped on hers, wringing sensation from her with demanding pressure. Forcing her lips apart, he searched her with his tongue the way she remembered, and it felt so good, she thought she might faint. A whimper rose from her throat, and he licked and bit gently at the sound and sealed their mouths together in a deep, insatiable kiss that involved his lips, breath, hands, body, soul.
Whatever it might be like to go to bed with this man . . . it would be anything but mediocre.

New York Times bestselling author LISA KLEYPAS graduated from Wellesley College with a political science degree. She is a RITA® Award-winning author of both historical romance and contemporary women’s fiction. Her novels are published in twenty-eight different languages and are bestsellers all over the world. She lives in Washington State with her husband Gregory and their two children.
Website  |  Facebook  |  Twitter  |  Instagram  |  Goodreads  |  Amazon
This promotion is brought to you by Pure Textuality PR.