Today I’m going to tell you about some of the books I’m waiting for an I am SO SUPER EXCITED FOR. There are a LOT of them, so I’ve narrowed it down to the ones about nerds, LOL. That’s right, you heard me – these are the books with the nerdy MCs.

Regina Hobbs is nerdy by nature, businesswoman by nurture. She’s finally taking her pop culture-centered media enterprise, Girls with Glasses, to the next level, but the stress is forcing her to face a familiar supervillain: insomnia. The only thing that helps her sleep when things get this bad is the deep, soothing voice of puzzle-obsessed live streamer Gustave Nguyen. The problem? His archive has been deleted.Gus has been tasked with creating an escape room themed around a romance anime…except he knows nothing about romance or anime. Then mega-nerd and anime expert Reggie comes calling, and they make a trade: his voice for her knowledge. But when their online friendship has IRL chemistry, will they be able to escape love?
–

Nerdy girls, nerdy girls! *leads cheerleading team* I love seeing some nerd-girl rep in romance! Also, I love that this cover has actual POC cover models. I’ve noticed a definite trend toward illustrated covers, and it seems like it’s especially in books about POC characters, and while many of them are REALLY amazing, I think representation matters. This cover is gorgeous, and I’m so happy Avon and Alyssa and everyone involved decided to use real and fabulous cover models and not go the illustrated route on this one. ALSO; every book in this series has somehow managed to be even better than the last, which should be impossible because I’m pretty sure I’m been rating them 5 stars since book 2. As this is the 5th book (including novellas, officially book 3.5), if it continues on-trend I’m pretty sure the awesomeness is going to make my head explode. 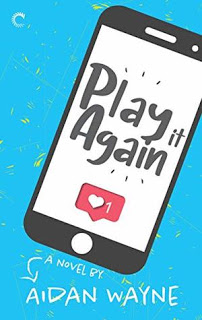 Play It Again by Aidan Wayne

The videos are fun.

When Seattle-based blind YouTuber Dovid Rosenstein finds Sam Doyle’s Let’s Play channel, playitagainsam, he’s instantly captivated by the Irish gamer. Everything about Sam is adorable, from his accent to his personality, and Dovid can’t get enough of his content.Dovid’s glowing shout-out on Don’t Look Now, his own successful channel, sends Sam’s subscriber numbers skyrocketing overnight. He has more comments than he can read. And while the sudden surge in popularity is anxiety inducing, Sam decides it’s only right to dedicate his next episode to Dovid…which soon leads to a heart-pounding exchange of DMs.They may have never met in person, but Dovid’s never felt this close to anyone before. What they have feels worth exploring—no matter the distance. But is it possible to already be in love with someone who’s half a world away?
–
Ahh! Even the blurb has me clutching my cheeks like an anime character and emitting a high-pitched squee noise. I’m pretty sure there are even little cartoon hearts popping out above my head. I love an online romance, and this sounds so cuuuute. And hooray for having a blind MC, because the world needs more diverse main characters! Can’t wait to read this one. *so many little puffy hearts popping*

The Right Swipe by Alisha Rai

Alisha Rai returns with the first book in her sizzling new Modern Love series, in which two rival dating app creators find themselves at odds in the boardroom but in sync in the bedroom.Rhiannon Hunter may have revolutionized romance in the digital world, but in real life she only swipes right on her career—and the occasional hookup. The cynical dating app creator controls her love life with a few key rules: – Nude pics are by invitation only – If someone stands you up, block them with extreme prejudice – Protect your heart Only there aren’t any rules to govern her attraction to her newest match, former pro-football player Samson Lima. The sexy and seemingly sweet hunk woos her one magical night… and disappears. Rhi thought she’d buried her hurt over Samson ghosting her, until he suddenly surfaces months later, still big, still beautiful—and in league with a business rival. He says he won’t fumble their second chance, but she’s wary. A temporary physical partnership is one thing, but a merger of hearts? Surely that’s too high a risk…
–
Ooh boy! This book has it all! A lovers-to-enemies-to-lovers vibe, high-powered nerds – actually I can’t tell from the blurb if he’s actually a nerd or not…. It says “two rival dating app creators” and later says he’s a former pro-football player and is “in league with a business rival.” I sure hope he’s a sports nerd, because the world needs more multi-faceted hot guys. Anyway, it’s got a nerd-girl heroine at least, and that’s a definite plus. I’ve read other books by Alisha Rai and loved them, and I’m interested to see if this change in cover style reflects any change in writing style.

What new and upcoming books are you most excited about? Tell me in the comments. Bonus points if they have a nerdy main character!

Remy wants to steal my lunch...
Went for a walk this morning and there's a whole field blooming and lovely. Is this lupine? It's gorgeous and smells divine. 💕
Doing a small relax with the kittens and my littlest. 💕
My mom's new babies, Thor and Storm. 💕
It's been a minute since I posted, so here is a picture of Remy the Wonder Dog!
Mondays.