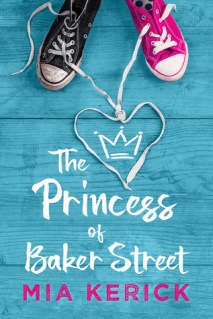 The Princess of Baker Street

Summary
When she was a child, Joey Kinkaid, assigned as a boy at birth—wearing Mom’s purple sundress and an imaginary crown—ruled the Baker Street neighborhood with a flair and imagination that kept the other kids captivated. Day after day, she led them on fantastic after-school adventures, but those innocent childhood days are over, and the magic is gone. The princess is alone.Even Eric Sinclair, the Prince Eric to Joey’s Princess Ariel, has turned his back on his former friend, watching in silence as Joey is tormented at school. Eric isn’t proud of it, but their enchanted youth is over, and they’ve been thrust into a dog-eat-dog world where those who conform survive and those who don’t… well, they don’t. Eric has enough to deal with at home, where his mother has abandoned him to live in isolation and poverty.But Eric can’t stay on the sidelines forever. When Joey finally accepts her female gender and comes to school wearing lip gloss, leggings, and a silky pink scarf, the bullies readily take the opportunity she hands them, driving Joey to attempt suicide and leaving Eric at a crossroads—one that will influence both their lives in not just the present, but the future.Is there a chance the two teens can be friends again, and maybe even more?

Review
This book was really difficult to get into because it’s told from the POV of Eric, an 8th grader who isn’t the “sharpest tool in the shed,” as his mom tells him. As such, it reads the way an 8th grader might speak, so the grammar is not great which at times made this book paaaaaainfullllll. Maybe if I was still in 8th grade (and not 33 years old…) I’d have found it less painful. I’m really glad I stuck with it though, because this book has several great messages and a really great story, and I found myself rooting for both Eric and Joey so hard. The Princess of Baker Street should be required reading for middle schoolers. I want to sit every middle school kid down and have them read this and Jerry Spinelli’s Stargirl, and then cry and hope that someday kids will be able to go through their preteens and early teens and not tear each other apart for being different. (Hey, I bet you can guess whether I was bullied really badly in middle school…) I love the message of hope in the second half of this book, and that everything isn’t magically fixed but that it does get better for everyone, and that as these kids grow up they’re able to become stronger and more sure in themselves and their identities, and to band together and stick up for each other and be their real and true selves.An ARC of this book was provided by the publisher via NetGalley for review.