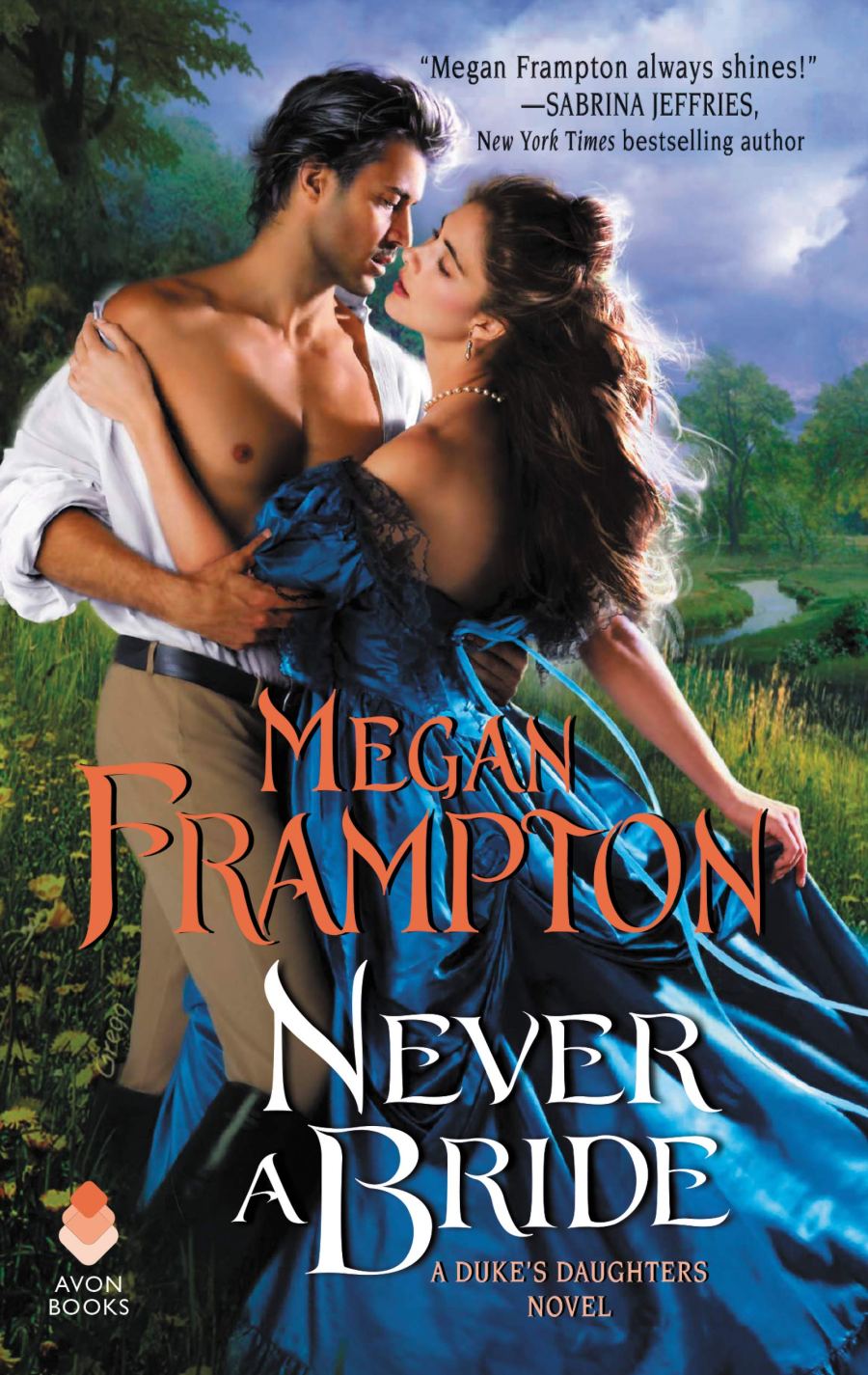 Together, they enter a make-believe betrothal that shocks London society…

After twelve years in Her Majesty’s Navy, Griffith Davies must leave his sea-going life of outrageous freedom behind, forced to rejoin London society as the heir to the Duke of Northam. But though he is now shackled to the land, he has no desire to wed some innocently dull young thing.  Who best to shield him from the matchmakers than a woman as notorious as he?

Lady Della Howlett’s reputation was tattered years ago, so entering into a false engagement with Griffith is hardly going to make matters worse. What’s one more shock to the ton to set their tongues wagging? And this pact certainly has its pleasures; the passion Griffith commands in her goes well beyond their agreement. Could her feelings might be more honorable than she’d first imagined?

Soon, Griffith and Della are arousing more than scandal, they’re courting heartbreak.  And more than their reputations could still be at risk.

Never a Bride
by Megan Frampton 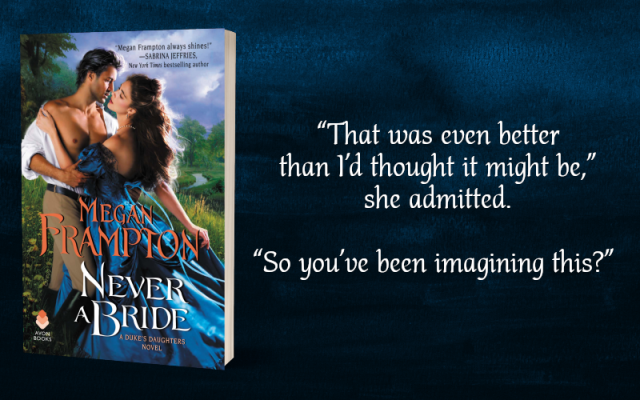 “And who are you?” she asked, turning her gaze to Griffith. Unlike the man, she didn’t seem intimidated at all by his size. That was a surprise; most people at least blinked twice when they saw him. Plus, he had just rescued her from an unpleasant situation. The very least he could expect would be some gratitude.

None appeared to be forthcoming.

She was as beautiful as he’d suspected; her dark hair was swept up underneath her hat, a few enticing strands falling down around her face. Her eyes were dark also, with delicate eyebrows that were raised in question. Her nose was perfect, and her mouth—her lips were full and red, and she had a mole to the right of her mouth that seemed—to Griffith, at least—a visual marker for where his own mouth should start kissing her.

“I am your stalwart savior,” he said. He gestured toward the table. “Would you care to sit down and have a cup of this pub’s finest ale? Which, admittedly, isn’t very good. But I promise, the company is superb,” he added with a rakish grin.

She glanced toward the table, and Clark, and looked back, a wry expression on her face. “I’m not certain I should, if that is what happens after having some ale. Or is it that you are such a dull conversationalist that he’s fallen asleep rather than talk to you?” Her expression was teasing, and he admired how full of aplomb she was, given that she was clearly completely out of her element here. And yet was still holding her own.

“I am an excellent conversationalist. When I am not rescuing damsels in distress—” he began.

“I was not in distress,” she interrupted. “Merely impeded by a ruffian in pursuit of my goal. Not the first time that has happened,” she added in a rueful tone.

He wanted to know more about that, but he suspected she wasn’t the type of lady to reveal her secrets all at once.

“I was doing just fine without you,” she continued, crossing her arms over her chest.

In fact, he suspected she would reveal none of her secrets. Which only piqued his curiosity more.

To celebrate the release of NEVER A BRIDE by Megan Frampton, we’re giving away one paperback set of the first three books in the series!

GIVEAWAY TERMS & CONDITIONS:  Open to US shipping addresses only. One winner will receive a paperback set of Lady Be Bad, Lady Be Reckless, & Lady Be Daring by Megan Frampton. This giveaway is administered by Pure Textuality PR on behalf of Avon Romance.  Giveaway ends 5/16/2019 @ 11:59pm EST. Avon Romance will send the winning copies out to the winner directly.  CLICK HERE TO ENTER!

MEGAN FRAMPTON writes historical romance under her own name and romantic women’s fiction under the name Megan Caldwell. She likes the color black, gin, dark-haired British men, and huge earrings, not in that order. She lives in Brooklyn, New York, with her husband and son.