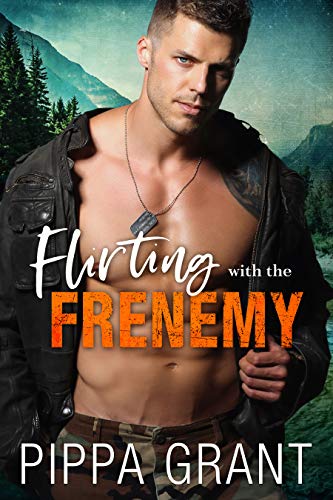 Flirting with the Frenemy

Summary
Mission: Survive my best friend’s wedding, where I must play nice with my ex and his perfect new girlfriend.

Strategy: Bring the hottest fake boyfriend on the planet.

Complication: Wyatt Morgan. My brother’s best friend. My sworn enemy. Military man. Sexy as hell single dad. The man I let into my panties for one night of hot hate sex after my ex dumped me.

And the man who just scared off that perfect fake boyfriend.

By pretending to be my real boyfriend.

I can roll with this though. What’s the harm in Flirting with the Frenemy if it helps me get the job done?

Complete my mission and move on.

Or so I thought.

Until Wyatt kisses me again and I start feeling things I shouldn’t.

The thing about weddings…nothing ever goes as planned.

Flirting with the Frenemy is a rollicking fun romantic comedy featuring a single dad military man, an irritatingly attractive blast from his past, pirates, cursing parrots, and a wedding gone wild. It stands alone with no cheating or cliffhangers.

Review
I’ve read some other stuff by Pippa Grant, but something about theBro Code series is just a major hit for me. I love a good brother’s best friend trope, and a great enemies to lovers romance. I’m not really a fan of the single dad trope, but it really works for me here. (Tucker is just too cute!) Pippa Grant has this sort of manic, super weird, crazy-person writing style, and sometimes it’s way too over the top but I think she leashed it and directed it really well in this book. I found myself grinning like an idiot several times while reading Flirting with the Frenemy, and also shot Diet Coke out my nose at one point (that has to do with Frogger and Etch-a-Sketch…). I think Pippa would’ve been proud of my Diet Coke nose antics. 😉

The dynamic between Ellie and Wyatt is amazing. I love their snark and banter, and love how they push each other to be better – even if it is just to piss the other one off. Their banter is hilarious, while at the same time they’re both dealing with some really heavy emotional stuff, both in regards to their relationship with each other as well as Wyatt dealing with his job, his divorce, and being a single dad that is forced by his job (in the military) to live hours away from his son and then Ellie with her own sense of self-worth and capability in the aftermath of her bad breakup and devastating car accident.

The town of Shipwreck is adorable, and I love everyone in it. ALL OF THEM, even the parrot with the potty mouth. Also, now I need Grady’s book. *grabby hands* And Cooper’s. GIMME.

Flirting with the Frenemy is the first book in the Bro Code series, and can be read as a standalone. (But you’re REALLY gonna want to read the next book in the series, America’s Geekheart – trust me on this one!)

3 thoughts on “Book Review: Flirting with the Frenemy by Pippa Grant”