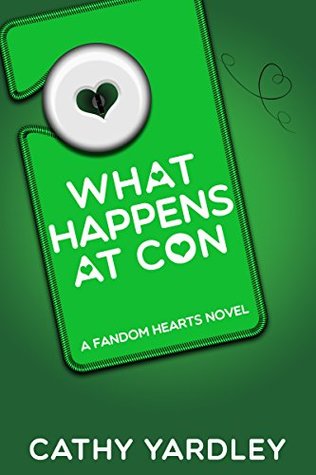 What Happens at Con

She’s burned out from dealing with sexist crap, and with the hell of her grad program looming ahead of her, she just wants one night of nameless cosplay masquerade sex to blow off some steam. But even that goes wrong when the masks come off….

Abraham wants more than he ever expected….

He’s usually been a short-term guy, but one night with Ani opens his eyes. He’s shocked when she’s the one to pull away, saying that with everything she’s got going on, she has neither the time nor energy for a relationship.

Can this tough guy prove he has what it takes to care?

She doesn’t need a defender: She needs a supporter, someone to help her pick up the slack in her life. He’s been a fighter, not a nurturer, but he’ll do whatever it takes to show her that what happened at Con shouldn’t just stay at Con…

Review
I really love this series – like, SO MUCH. I love the strong friendships between the group of friends that revolves around a geeky bookstore (like, what’s not to love?) That being said, this was probably my least favorite installment of the series so far – but I still did really enjoy it, don’t get me wrong! I just didn’t hardcore bounce off the walls with excitement and joy reading it like I did the others in the series.

If you read the first book in the Fandom Hearts series, you likely remember Abraham. He was kind of a giant sexist tool and not very likable. Even though this book is about him, and even though he does go through a remarkable amount of personal growth, I still didn’t find him very likable – and he’s the hero of the story! I am the type of person who has a hard time really enjoying a book if I can’t see myself being friends with and enjoying the company of the romantic leads. I appreciate that Abraham comes from a super toxic background and to some extent “can’t help it,” and that he manages to go through an impressive amount of personal growth. I also really appreciate that he doesn’t magically change just because he finds the “right girl,” but instead knows he’s flawed and is going to keep screwing up, but hopefully not make the same mistakes twice.

I don’t really remember Ani from any of the earlier books (but it’s been a while since I read them), so I spent half of the book trying to remember who she is. She spends a goodly portion of this book under some MAJOR stress, trying to take the next step in getting her doctorate. I love how passionate she is about her field of study (infectious diseases!), and Lord knows I love a woman in STEM. I do wish there’s been some more about her study of infectious diseases in the book, though, because she is CLEARLY a bad-ass and I don’t feel like that was really IN the story enough.

This is the fourth book in the fandom hearts series, and while it can be read as a stand alone it does have some spoilers for the first book,Level Up. Also there are a lot of characters in this one, with Ani’s friend group and Abraham’s friend/work group involved, and the first book in the series does a really good job setting up all these characters and their interweaving relationships. For maximum understanding of who everyone is, read Level Up first, if not the others in the series before this one.

•✦✦• COVER REVEAL & eARC PRIZE! •✦✦•
•✦✦• COVER REVEAL & eARC PRIZE! •✦✦•
The Shenanigans continue!
My review of Playing Games by Riley Hart is up on my blog! This book was an awesome kick-off to the FUKings series!! 💕💕
Class is now in session!
I'm on sort of a Saxon James binge lately, haha. She's just so good!!! Anyway, I picked up this copy of Roommate Arrangement purely because the cover is adorable, and now I've read like 10 Saxon James books this week. 🤣 Check out my review over on my blog! www.elleyotter.com (link is in my bio)