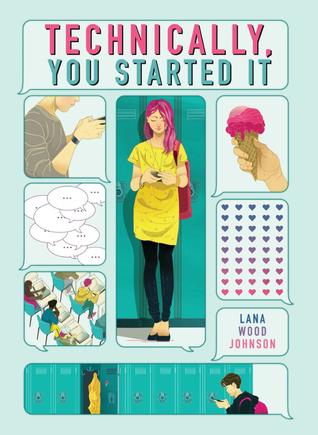 Technically, You Started It

Summary
When a guy named Martin Nathaniel Munroe II texts you, it should be obvious who you’re talking to. Except there’s two of them (it’s a long story), and Haley thinks she’s talking to the one she doesn’t hate.

A question about a class project rapidly evolves into an all-consuming conversation. Haley finds that Martin is actually willing to listen to her weird facts and unusual obsessions, and Martin feels like Haley is the first person to really see who he is. Haley and Martin might be too awkward to hang out in real life, but over text, they’re becoming addicted to each other.

Review
I adored this light, fluffy YA romance read. Then again, the whole mistaken identities trope is IT for me, so I was totally behind M saying he was the “good” Martin, and Haley thinking that’s the OTHER Martin. There are several times where you do really need to suspend disbelief, but hey – it’s a fun read.

My heart was also BREAKING for Martin at various points in this book once he realizes what’s happened. Like, it had me physically grabbing my chest trying to squish the pain out, or hold it in, I’m not sure. I am actually tearing up writing this review, and I finished reading this book a week ago. I am physically incapable of rating a book that touches me that deeply anything less than 5 stars, wacky and unbelievable hijinks aside. And he’s so adorable and just caught up in this teenage high school drama. Haley might have been a little unlikeable if she wasn’t such a giant introverted nerdball, and thus completely endeared herself to me for life.

Read this book if you love rom-coms and are willing to suspend disbelief in favor of a great story, and if you like to laugh, and maybe are a bit weird. 😉

One thought on “Book Review: Technically, You Started It by Lana Wood Johnson”

Getting a jump start on my #24in48forever #not24in48 #readathon #tbr! First up - My Room is a Dungeon Rest Stop! I picked this up because I loved the anime Is it Wrong to Pick Up Girls in a Dungeon? and this looks like it's got a similar vibe. 💕 . #manga #graphicnovel #egalley
My #tbr for this weekend's #24in48forever #not24in48 #readathon. 💕 @arielkirst is coming down to read (and eat sushi!) with me and it's going to be epically awesome. . #graphicnovel #romancereader #ireadromance #booknerd #bookdragon #bookstagram #bookwormlife
Set up my painting space. It's small and doesn't have the greatest lighting, but it's mine. . #dungeonsanddragons #dnd #dndminiatures #minipainting #painting #crafting #paintingminiatures
Painted up my tiefling warlock, Callisto, and her BFF Autolycus for my Tuesday night D&D campaign. I am just starting out painting so I know I super suck, haha. Experimented with some dry brushing on Autolycus and some highlighting in Calli's hair. . #dnd #dndcharacter #dungeonsanddragons #tiefling #warlock #miniatures #painting #badassbabes
Decided to finally DO something with all the pins/stickers swag I've gotten from events/giveaways. 💕 I have a lot more than I realized! Still plenty of room on this bad boy though, and when it gets full I have my That's What She Read tote from #kisscon 2019 that I can use as a pin banner as well. 😉 . #booknerd #bookdragon #itsnothoardingifitsbooks #ireadromance #romancereader #igreads
Here's my #topnine posts for 2019 💕 Maybe I'll try to post more in 2020 - who knows!