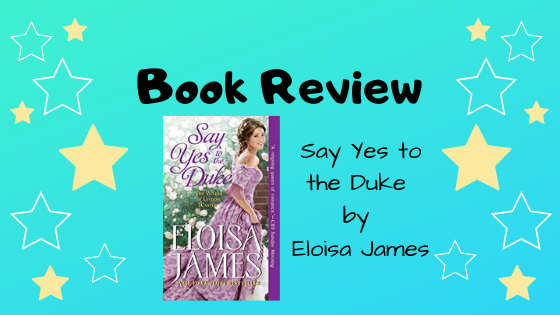 Say Yes to the Duke

Summary
Miss Viola Astley is so painfully shy that she’s horrified by the mere idea of dancing with a stranger; her upcoming London debut feels like a nightmare.

So she’s overjoyed to meet handsome, quiet vicar with no interest in polite society — but just when she catches his attention, her reputation is compromised by a duke.

Devin Lucas Augustus Elstan, Duke of Wynter, will stop at nothing to marry Viola, including marrying a woman whom he believes to be in love with another man.

A vicar, no less.

Review
This is another great installment of Eloisa James’ Wildes of Lindow Castle series. The Wildes remind me a bit of Julia Quinn’s Bridgertons in that they’re a big, boisterous family that cares more about loving each other (and having some fun…) than they do about standing on ceremony.

Viola isn’t like the rest of her family. She’s her mother’s daughter from her first marriage and doesn’t feel like a “real” Wilde, which causes some of her anxiety. She’s a retiring voilet amid a very spirited family, and I adore how protective they are of her. It’s mentioned several times that Viola’s got a razor sharp wit when she’s among just her family, but I wish we’d gotten to see that side of her a little more rather than just hearing about it. We do get to see some of it once she starts getting more comfortable with Devin, which is great.

I love the dynamic between Viola and Devin. They’re one of those really great couples where they both help the other to grow and strengthen the parts of themselves that are weak or wounded. Also, it’s a good thing Devin’s father and already dead or I’d find him and yeet him into the sun – what a butt. Devin is very much the trope of the alpha male who is secretly deeply wounded by a bad childhood, so it’s made him cold and unloving but secretly all he really needs is the right person to open his eyes (and his heart). I wish too he’d had a bit more depth to his character other than just “my father always shouted and challenged people to duels when he lost his temper – which was always – so I never lose my temper or feel anything at all really – oh wait, I actually hurt badly from my tragic childhood.” Still, it’s a trope for a reason and Devin is still a very enjoyable character (especially when his cousin Otis is thrown into the mix!)

This is the fifth book in the Wildes of Lindow Castle series, but can be read as a stand alone with very minor spoilers for the earlier books. I’ve got my fingers crossed for a book 6 so we can get Joan’s story!

An ARC of this book was provided by the publisher via Edelweiss+ for review. All opinions are unbiased and my own.

One thought on “Book Review: Say Yes to the Duke by Eloisa James”