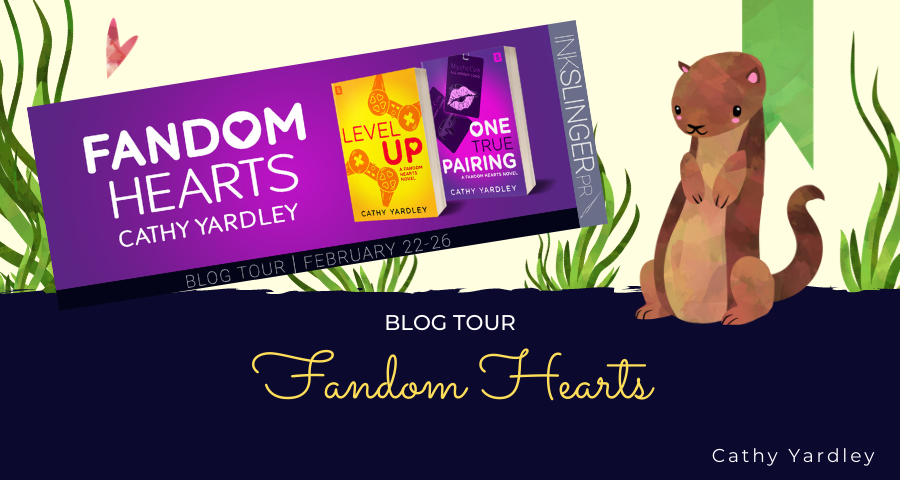 Today we have the blog tour of Cathy Yardley’s Level Up & One True Pairing!
Check out this gorgeous romance and be sure to get your copy today!

Summary
Geeky introvert Tessa Rodriguez will do whatever it takes to get promoted to video game engineer– including create a fandom-based video game in just three weeks. The only problem is, she can’t do it alone. Now, she needs to strong-arm, cajole, and otherwise socialize with her video game coworkers, especially her roommate, Adam, who’s always been strictly business with her. The more they work together, though, the closer they get…Adam London has always thought of his roomie Tessa as “one of the guys” until he agreed to help her with this crazy project. Now, he’s thinking of her all the time… and certainly as something more than just a roommate! But his last girlfriend broke up with him to follow her ambitions, and he knows that Tessa is obsessed with getting ahead in the video game world.Going from friends to something more is one hell of a challenge. Can Tessa and Adam level up their relationship to love?

Summary
They couldn’t be more opposite, the Hollywood actor and the hometown girl, but all they need is a little convention magic to become the perfect ship in Cathy Yardley’s One True Pairing.Jake Reese needs a decoy girlfriend. Fast. The lead actor of the popular TV show, Mystics, is tired of losing his shirt to overeager fans. Literally. Which is why a chance meeting with gothabilly bookworm-slash-barista Hailey Frost seems almost too perfect to be true. Hailey is not impressed with his TV fame and is desperate to save her family’s bookstore. It’s a match made in Hollywood, but as the two pretend to date, fan fiction becomes reality. Can this OTP become canon?

Excerpt from One True Pairing

He glanced at her. “I don’t suppose you could take me,” he said, with a hopeful smile.

She felt a jolt of awareness flash through her like an electric shock.

Dimples, she thought absently. They were her downfall.

She looked heavenward. “I have an afternoon shift, at my other job,” she said, trying to fight the pull of attraction she felt.  This guy’s not for you, kiddo.

“You said it’s only five minutes away, though,” he wheedled.

“What is it with guys trying to get on my good side today?”

He deliberately turned, pointing at his ass. She saw the gaping hole where his pocket used to be. The guy was wearing striped boxers, she noticed. He also had an ass a woman could write odes to, she couldn’t help but also notice.

“I don’t think I’ll survive another round with those women,” he said, his eyes imploring.

“Fine,” she said, ignoring the flash of his blue eyes and her corresponding hormonal bump.  “As soon as my replacement comes back, I’ll…”

“Oh, thank you,” Jake said quickly. Before she knew it, he was hugging her.

She was being hugged by Jake Reese, a.k.a. Rick from Mystics, the brooding bad-boy with muscles for miles and a kick-ass Shelby Mustang.

He smelled like expensive cologne, just a splash of it, plus some pure rugged male. Her body tightened in response, her breasts crushed up against the rock-hard wall of his chest.

Of course, it was at that point that Stan breezed back in, a paper bag of greasy goodness in hand. “Thanks, Hales, I…” he stopped, jaw dropping at the sight in front of him.

Jake pulled back away from Hailey, with a rueful half-smile.

“Well, I got a double burger and fries with a milkshake,” Stan said, tongue in cheek. “What goodies did you grab for lunch, girl?”

Cathy Yardley is an award-winning author of romance, chick lit, and urban fantasy, who has sold over 1.2 million copies of books for publishers like St. Martin’s, Avon, and Harlequin. She writes fun, geeky, and diverse characters who believe that underdogs can make good and sometimes being a little wrong is just right. She likes writing about quirky, crazy adventures, because she’s had plenty of her own: she had her own army in the Society of Creative Anachronism; she’s spent a New Year’s on a 3-day solitary vision quest in the Mojave Desert; she had VIP access to the Viper Room in Los Angeles. Now, she spends her time writing in the wilds of East Seattle, trying to prevent her son from learning the truth of any of said adventures, and riding herd on her two dogs (and one husband.)