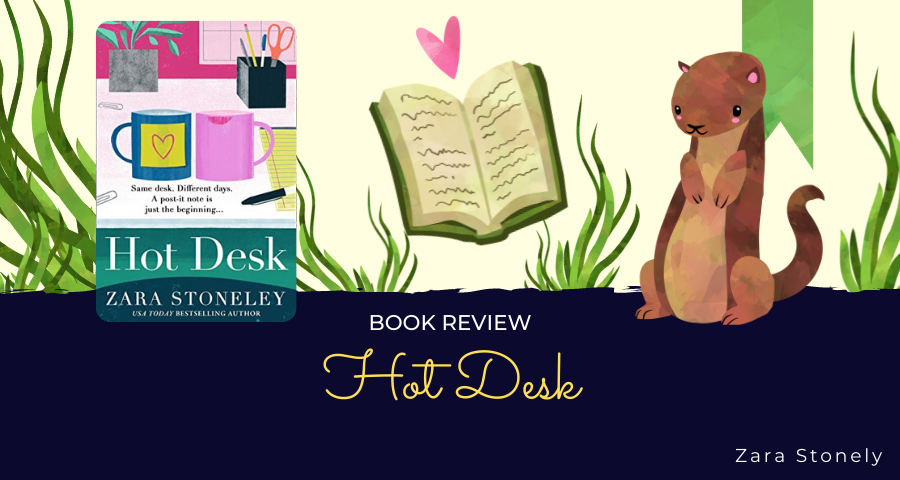 T/W: contains references to life after the Covid pandemic

Alice loves her job and wants to keep it – whatever the price. But then she’s told the company is switching to flexible working and hot desking…Alice’s desk might look a mess, but she knows exactly where everything is. Or she did. Until she found out she’s going to share it with the most annoying guy in the office.

Jamie can work from anywhere. He’s quite happy to sweep his work life into a box at the end of the working day. But can sharing a desk with Alice be as much fun as teasing her in person?

With no option but to try it and see, will their relationship turn into open warfare or will it ever progress beyond a post-it note?

First, I have to say – this book is a hot mess. It probably didn’t help that I read an egalley that was formatted just horribly, so hopefully those who read a fully finished copy don’t have to deal with that. Still, I found myself lost and rather exasperated through most of the book. It’s written in the first person from Alice’s point of view, and is MOSTLY present tense but occasionally slips into past tense in weird ways that made me confused about if Alice was remembering something that happened before or in the current time. There’s also repeated and rather endless (and annoying) repetition about exactly WHY Alice is so attached to all her stuff. I almost DNF’d at 3%, in the first chapter, because it was so obnoxious and just exhausting being inside Alice’s (jumbled) head.

Then the story really starts to pick up with her interactions with Jamie, and I was briefly sucked in again. YES! Their banter is so cute and fun. And then in the last 10-15% the story just got seriously bogged down with Jaime’s drama side story, which just… was weird and didn’t fit right and just threw the pacing and vibe all off again.

There is also a LOT of British slang in here, and as an American reader I had to look some things up. There are a few bits where I was unsure if there were typos or poor grammar, or it’s just a difference in the two types of English, haha.

So the beginning and end both dragged and were a hot mess, but there were some glimmers of gold buried in there along the middle. Something about it compelled me to keep reading, though, so there’s SOMETHING there! Maybe it just needed a bit more polishing.

I recommend if you have a high tolerance for internal babble BS. I’ll probably not be picking up another book by Zara Stonely for a while, though.

One thought on “Book Review: Hot Desk by Zara Stonely”

I'm back in the office one day a week, and I decided to explore my lunch break walking path options today.
Not too shabby for my first foray into jewelry making!! Bumblebee jasper pendant with labradorite, tiger eye, and gray onyx beads. 💕
Started a new craft project and immediately launched a shard of metal wire shrapnel directly at my eye. Good thing I'm an excellent flincher, lol.
Since August is Romance Awareness month, @readforeverpub changed things up for their influences and did special curated romance boxes! I picked the Jodi box, and am so pleased with the selections! I can't recommend West End Earl by @bethanywriteskissingbooks enough, and I'm excited to read these other new to me titles!
Started over - whomp whomp! At least it's looking much more triangular now. 🤣
Wahhhhh it's all wonky and I don't know what I'm doing wrong! Do I pull it all out and start over? How do I keep it from going all flurnky? Pretty sure it's supposed to he more triangular shaped, but IDK, the site where I got the pattern doesn't actually show the top part??? Arggghhhh.