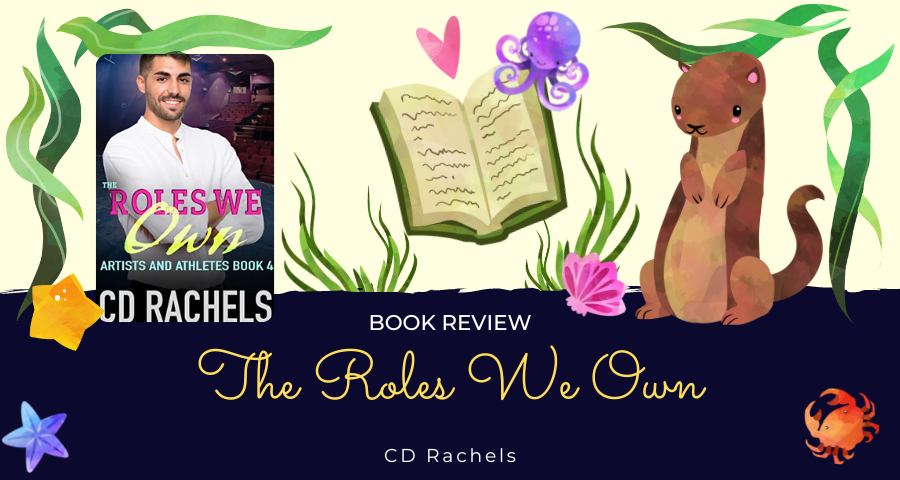 The Roles We Own

Omar
Romance isn’t for me. Don’t get me wrong, I love the corniness of rom-coms, but it’s not in the cards in my life. I play hard on the soccer field, I party hard with my boys, and I fool around with any girl or guy who’s hot and willing. The only person off-limits: my best friend’s boyfriend’s brother, Sly O’Rourke. He’s cute, but I don’t do feelings.
Staying away from him would be easy if I didn’t have to direct the school musical for my degree credits. Sly is auditioning, and he’s not the shy, nerdy dude everyone thinks he is. He’s talented, charming, and gorgeous—totally boyfriend material, if I’d ever do relationships. When he asks for help practicing physical intimacy for the play, how can I refuse? It’s my job to make sure this musical is a success, and that’s what this is: strictly business.
But when his mouth catches mine, our bodies don’t get the memo. I don’t think Sly and I are acting anymore.

Sly
I’ve played the role of a comfortable straight guy for too long. The truth is: the thought of physical intimacy makes me nauseous. I’m not interested in anyone, guy or girl, which sucks, because I’ve always wanted a romantic story of my own.
Now that I’m at Korham University, I have the chance to redefine myself. If I play the role of a romantic hero during the semester musical, maybe I’ll learn to enjoy touching people or catch real feelings for once. There is one complication to my plan: I have to spend a lot of time with soccer jock Omar Odom. He’s a touchy, handsy party boy, but I eventually see a different side to him. As the weeks go by, my brother’s boyfriend’s best friend doesn’t seem so bad. He’s chill in ways I never could be and supports me in the play. He’s the perfect guy who can help me with the physical aspects of the dramatic arts.
When Omar puts his mouth on mine, I expect to be repulsed, not burning up on the inside. I’ve never wanted a girl or guy before so…what is happening to me? And why don’t I want it to stop?

[“The Roles We Own” is a low-angst, male/male romance about new adults in college. It involves theater rehearsals, soccer games, frat parties, cartoon onesies, raisin bagels, and discovering what gray-asexuality can mean.
It is the fourth book in the Artists and Athletes series but can be read as a stand-alone.]

Yaaaay finally Omar’s book! I’d been looking forward to this bisexual f-boy’s book since book one in the series, The Lines We Draw.

I love seeing more ace representation in romance. Sly is still figuring himself out and finding where on the queer spectrum he falls. The repeated reiteration of Sly being gray-ace got a little annoying after a while – like, we get it. I really appreciated the amount of exploring and examining he does, and the reassurances from other characters that his sexuality is what it is and that he’s not “broken.” And that asexuality and aromantic don’t necessarily have to go hand in hand!! It did feel like there was a bit of the “magic peen” thing going on in that Sly hates being touched except for some magical reason by Omar.

The chemistry between Omar and Sly is just so sweet. The worry and angst in this one seems to be mostly on Sly’s part, as he’s worried that (being gray-ace) he won’t be able to give Omar (who has a history of being a f-boy and doesn’t DO relationships) what he needs. I also LOVE the trope where it’s like we’re pretend dating for practice (or in this case, pretend touching/making out) and then they’re like “oh no, I’m not pretending anymore, but I can’t tell if he still is pretending or not ahhhhh.” It’s just DELICIOUS and this book delivers that vibe in spades. I also really love Omar’s journey of self-discovery, though I do wish his relationship with his family was a bit more fleshed out in the book.

This is the fourth book in the Artists and Athletes series, and can be read as a standalone. That being said, the cast of characters can feel overwhelming at times if you haven’t read at least some of the previous books in the series. The events of this book run concurrently with some of the events in books two and three, and there are some minor spoilers for book two in this one (possibly also book three, I haven’t read that one yet!)

I voluntarily reviewed a complimentary copy of this book. All opinions are unbiased and my own.